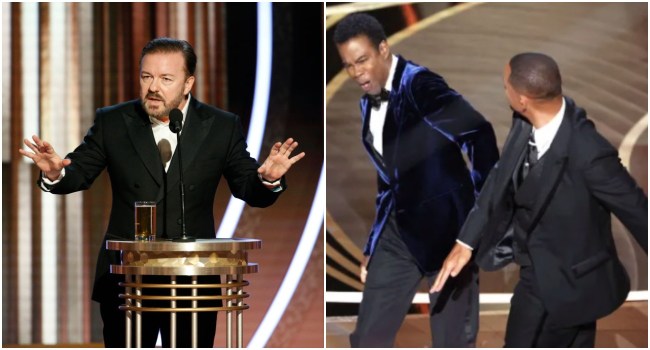 Ricky Gervais’ stints as an award show host are the stuff of legend. While most comedians at the forefront of the Golden Globes and the Academy Awards will do their best to toe the line of political correctness, Gervais brilliantly and routinely obliterates that line for the sake of true comedy, with his opening monologue at the 2020 Golden Globes being a primary example.

In case you forgot — which I would understand considering it was one of the last major pop culture events of the “Before Time” — Gervais got on stage at the Golden Globes and absolutely shredded the audiences as he dropped Jeffrey Epstein jokes, called out Apple’s sweatshops, and told presenters and winners alike to keep their political opinions to themselves. He did all of this, mind you, while casually sipping a beer, too.

Naturally, given the insane virality and popularity of Will Smith smacking Chris Rock across the face at this year’s Oscars, it was only a matter of time until Gervais chimed in on the incident, which he did via Twitter by retweeting a clip from the British version of The Office.

“And she's got alopecia. So… not a happy homelife." pic.twitter.com/b1NYWWIncX

Now that Gervais has weighed in, one could only imagine how the moment would’ve unfolded if he was in Chris Rock’s shoes. Maybe the Oscars will double down and ask Gervais to host next year’s ceremony.