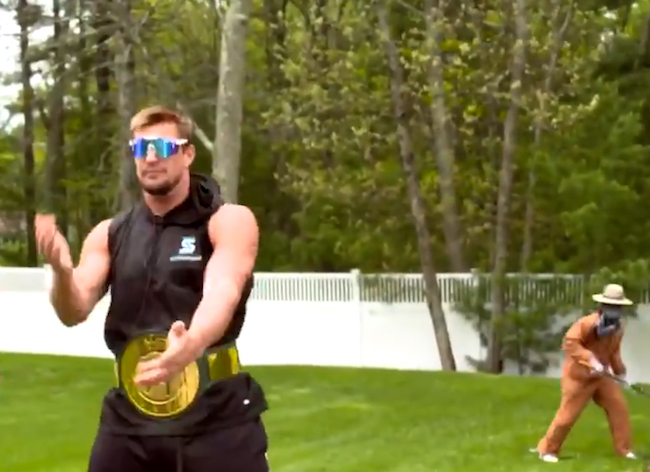 Rob Gronkowski’s 58-day reign as the WWE 24/7 champion, thankfully, came to an end.

The Tampa Bay Buccaneers’ tight end (that’s still weird to type) dropped the titled to R-Truth in his own backyard while filming a TikTok video.

As Gronk preps himself for a TikTok dance routine, R-Truth waits in the background dressed as a landscaper.

Gronk being distracted filming “the most viral TikTok dance ever” was all R-Truth needed to capture the gold.

WE HAVE A NEW #247CHAMPION AND HIS NAME IS @RonKillings!!!@RobGronkowski didn't see THAT coming! 😲😂#WWERaw pic.twitter.com/e8uWkbQsLS

R-Truth has the most 24/7 reigns at 36 and also has the record for the longest combined reign at 166+ days (official recognized as 153 days by WWE).

The WWE jokingly warned Gronk to be ready to defend the title at any moment, even in the middle of touchdown celebration.

With Gronk no longer holding wrestling gold, the future Hall of Famer will set his sights on the pending NFL season.