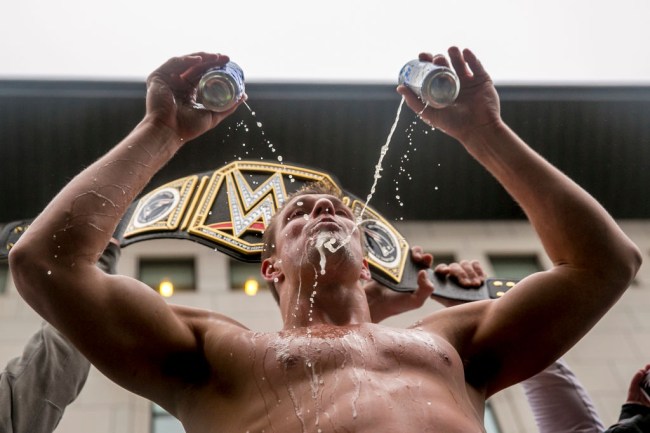 In 1997, Air Bud forced anyone who’s ever suggested dogs can’t play basketball to eat their words, and in recent years, PFTCommenter’s very good boy Leroy has similarly rebuffed people who claim canines lack the ethical fortitude to pursue a career in journalism by breaking a number of stories on Twitter even though his lack of opposable thumbs puts him at a distinct disadvantage compared to his human counterparts.

Leroy may not have a perfect track record  (which can be said for every reporter who isn’t a dog) but he still has a pretty solid reputation, so when he revealed he’d heard rumblings Rob Gronkowski was thinking about coming out of retirement to join Tom Brady in Tampa Bay, he caused ears to perk up just like his do whenever someone utters the word “treat” in his vicinity.

People were understandably skeptical at first but Gronk didn’t do much to dispel the rumors, and on Tuesday, Leroy got to experience the kind of satisfaction you can typically only get from a belly rub when it was revealed the Patriots had agreed to send the tight end to the Buccaneers along with a seventh-round pick in exchange for a fourth-round selection.

Gronk had managed to stay pretty busy during his leave of absence from football, as he followed in the footsteps of so many players before him by giving the “pivot to broadcasting” thing a shot. He initially started working as an NFL analyst, but last month, he made the incredibly on-brand move to sign with the WWE, where he is currently the reigning 24/7 Champion after securing the belt at WrestleMania 36.

You have to assume Tampa Bay will want to keep Gronk’s concussion count to a minimum so it’s unlikely that he’ll be stepping back into the ring at any point in the foreseeable future.

However, after the news broke, the WWE released a statement to remind Gronkowski that anyone holding the 24/7 title can be challenged at any place and time—even if the place is “the endzone” and the time is “just after scoring a touchdown.”

It’s a real shame Roger Goodell hates fun because Gronk getting speared and pinned by Mojo Rawley immediately after putting points on the board would be a moment for the ages.