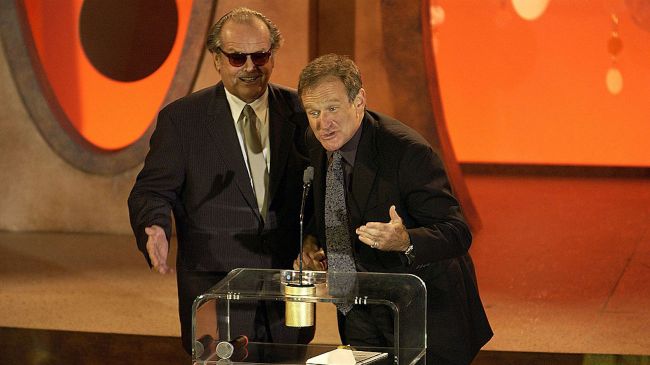 Happy Friday, everyone. I come to you from a quiet, cool early afternoon here in New York City with the weekend fast approaching on the horizon. The first true summer weekend is rolling into the city as temperatures are supposed to hit the 90s for the first time this year on Saturday, but right now, it’s the calm before the storm and the sense of relaxation that comes with it.

And in that relaxation comes the desire to visit some old favorites and unwind, whether it be ordering from my favorite lunch spot in town or tossing on my favorite movie in the background. However, because I just wrote an article about John Mulaney paying tribute to Robin Williams, an absolute hero of mine, that desire to kick my metaphorical feet up led me to one of my favorite clips of Williams: him accepting an award for Jack Nicholson at the 2003 Critics’ Choice Award.

There is, simply, no one in show business that could’ve pulled off what Robin did at this moment, as he bounced between impersonating Nicholson to flirting with Salma Hayek to paying his respect to Daniel Day-Lewis, all of which had a room full of Hollywood’s most powerful people in absolute stitches. And it was all improv, by the way.

Williams, of course, isn’t the only acting legend in the clip delivering the goods, as a completely stoned (by his own admission) Jack Nicholson rambles on about spanking professional wrestler Jillian Hall. In fact, and quite surprisingly, Williams is actually the one keeping the show on the rails, which really says something about both him and Nicholson.

If you’re as big of a fan of Williams as I am, I recommend the biography Robin by Dave Itzkoff and the HBO documentary Robin Williams: Come Inside My Mind. Rest in Peace, Robin. You truly were one of the best.

RELATED: Robin Williams Warned Young ‘Mrs. Doubtfire’ Co-Star About The Dangers Of Drugs — ‘It Was A Gift’