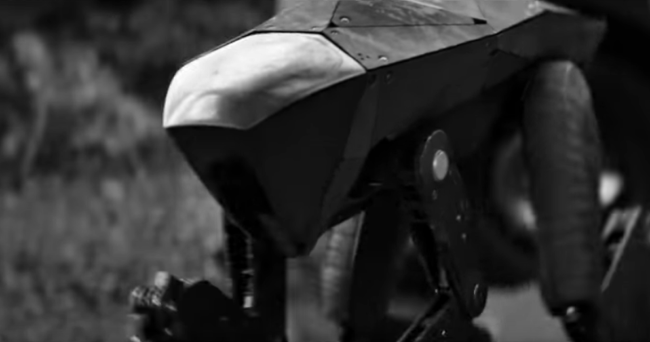 Once again, we humans have helped hasten our demise by providing even more ammunition, in this case literally, for the inevitable robot uprising.

Straight out of the Black Mirror episode “Metalhead,” Ghost Robotics and SWORD International have teamed up to create a semi-autonomous robot dog with with a 6.5 mm Creedmoor sniper rifle mounted on its back.

The Special Purpose Unmanned Rifle (SPUR), as it is called, is capable of precisely hitting a target up to 3,940 feet away, according to Ghost Robotics.

This robotic canine death machine was recently unveiled at the Association of the United States Army’s annual conference this week.

According to The War Zone, the SPUR “appears to be the first example of one of these unmanned systems with an actual weapon mounted on it.”

Unarmed examples of the Q-UGV [quadrupedal unmanned ground vehicle] are notably already in limited use with the U.S. Air Force’s 325th Security Forces Squadron at Tyndall Air Force Base in Florida and are being tested by other units within that service.

The exact configuration of the 6.5mm gun inside the SPUR module — how much ammunition it contains, and how hard it might be to reload — are all unclear. Ghost Robotics has said that SPUR can be instructed remotely to chamber the first round from an unloaded state, as well as clear the chamber and safe the gun.

Popular Science explains what some of the benefits this SPUR will provide to the military.

Putting a gun on the robot almost certainly requires bringing the human operator back into direct control over the machine, responsible for aiming and authorizing shots. That could still prove to be a battlefield boon. If the Q-UGV can get into a difficult-to-reach position, it could set up an ambush. With an armed robot drawing fire, human soldiers could maneuver into better positions and enemies waste ammunition tracking down a robot. In short, on the immediate level of what helps give an edge in a firefight, a gun firing from the back of a waist-height robot gives a squad commander a host of options.

What remains to be seen is the degree to which a human will be in control over the robot’s operation, its targeting, and its firing. Because that kind of communication needs to happen over air waves, it is possible a foe could jam the signal or feed the robot false information, turning the robot from an advantage into a liability.

Obviously, there is a concern that these killer robot dogs, much like the autonomous machine-learning drones which were reportedly used to attack and kill people last year, will a) fall into the wrong hands, b) be used against civilians, and/or c) turn on the very people who are supposed to be controlling them.