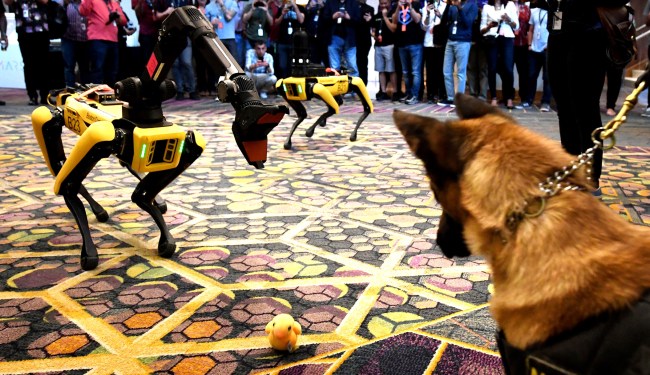 Years from now when the dozen or so human beings that are left on this planet following the robot uprising look back it will be Boston Dynamics and the people who worked there that they will be cursing.

Oh, sure, today the robot threat is still contained. As long as they are laughably easy to defeat like some of Boston Dynamics’ robot dogs and these parkour-loving little sh-theads below we’re all safe.

At Boston Dynamics, crashes are part of the process. Discover what we do when robots break and learn how we take the opportunity to rebuild more robust robots. https://t.co/znVJAYgwA5 pic.twitter.com/bvauH1kV7x

Related: For The First Time Ever, Drones Have Autonomously Attacked Humans – The Robot Uprising Has Begun

The problem is, as you can read in that tweet, is that people at Boston Dynamics keep rebuilding these f–kers and make them even more “robust.”

Speaking of Boston Dynamics and their creepy AF robot dogs, one of these monsters appeared on campus recently at the University of Missouri as students were making their way around campus.

Naturally, as happens with anything these days, someone caught this crime against humanity on TikTok.

“I took the video because I thought it was funny that they were running through our freshman Tiger walk,” Mary Hennessey, a freshman at the University of Missouri, told the Daily Dot. “They do kind of scare me because I’m not entirely sure what they are used for and why we have them.”

Pretty much everyone who commented on her TikTok video agreed.

“WAS THERE NOT AN EPISODE ON BLACK MIRROR ABT HOW BAD THIS IDEA IS?!!!” asked one viewer.

“THAT’S THE THING FROM BLACK MIRROR,” echoed another.

“What in the Terminator is this?!???” someone else asked.

Related: Sophia, The Creepy Talking Humanoid Robot, Is About To Go Into Mass Production So Our Days Are Officially Numbered

If you think this is bad, and you most definitely should, just wait until the military starts unleashing all of their robot soldiers.