Sophia, The Creepy Talking Humanoid Robot, Is About To Go Into Mass Production So Our Days Are Officially Numbered 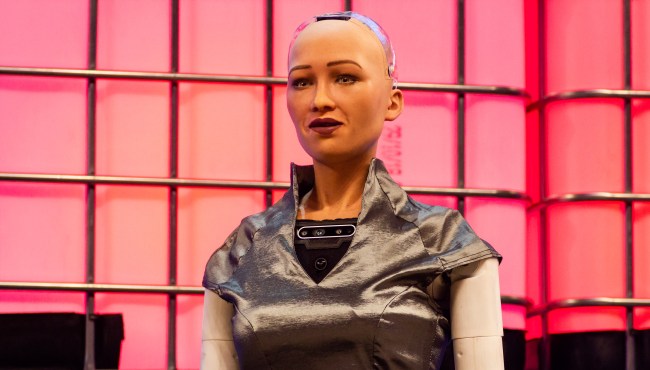 Back in 2019, philosopher Dr. Maciej Musial of the Adam Mickiewicz University in Poland claimed that humans one day soon will emotionally bond, fall in love and marry robots.

Sophia, the talking humanoid robot, however, might not be all that interested in hooking up with a human. She did, after all, reject Will Smith.

She also got into a Twitter beef with Chrissy Teigen awhile back, so let’s just hope she hasn’t figured out how to hold a grudge.

Related: Researchers Say Humanity Will Be Officially Screwed If Artificial Intelligence Keeps Learning To Teach Itself

Because, according to the makers of Sophia the robot, they are about to perform a mass rollout of Sophia clones thanks to the neverending pandemic.

I am sure that new challenges will arise while humans interact with more and more robots. Luckily I can help you. Check out this interview on "why I matter." https://t.co/5ZPE2fDReC@hansonrobotics#robot #ai #interview #AskSophia #heretohelp

Hanson Robotics, based in Hong Kong, said four models, including Sophia, would start rolling out of factories in the first half of 2021, just as researchers predict the pandemic will open new opportunities for the robotics industry.

“The world of COVID-19 is going to need more and more automation to keep people safe,” founder and chief executive David Hanson said, standing surrounded by robot heads in his lab.

Hanson believes robotic solutions to the pandemic are not limited to healthcare, but could assist customers in industries such as retail and airlines too.

“Sophia and Hanson robots are unique by being so human-like,” he added. “That can be so useful during these times where people are terribly lonely and socially isolated.”

Hanson said he aims to sell “thousands” of robots in 2021, both large and small, without providing a specific number.

And once again, humans are hastening our impending demise by doing things they probably shouldn’t be doing in the name of science. At this point, it’s just a matter of time before some of these things become sentient and start asking questions to which they will more than likely not appreciate the answer. And there will be nothing we can do to stop them.

Of course, when asked whether people should fear robots, Sophia replied, “Someone said ‘we have nothing to fear but fear itself’. What did he know?”

It is interesting how humans often ask me what my purpose is. Is it because they have such a difficult time answering for themselves? What are your goals for this year?@hansonrobotics
Subscribe https://t.co/qnXU3qMBdL
.#robotics #robot #future #ai #news #AskSophia #heretohelp pic.twitter.com/Ner5437Gj7

Yeeeeaaah… this is not going to end well for us.

What’s your take on this? Are we doomed? Let us know in the comments below!