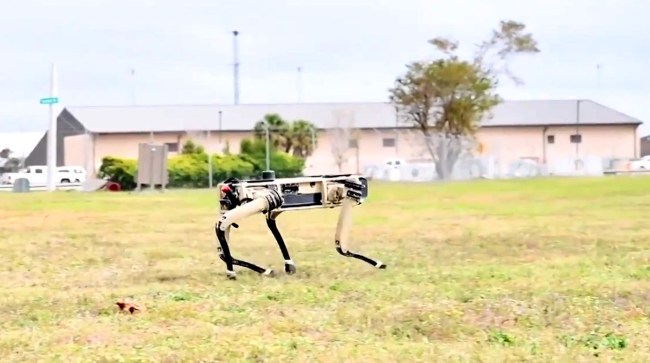 For the life of me I still can’t figure out why human beings are so hellbent on creating smart robots to do tasks normally performed by, well, human beings. It’s almost like we want to have to submit to artificial intelligence as our new overlords or something.

I mean, we’re just out here making things that hook our minds up to robots, manufacturing giant walking robots, and creating artificial intelligence “pilots” that are superior to our very own human fighter pilots.

What is wrong with us?

Further evidence that we are participating in our own demise comes in the form of some newly developed robotic dogs that will soon be patrolling Tyndall Air Force Base in Panama City, Florida.

Have you seen ever seen one of these robot dogs in action?!

Tyndall AFB will be getting four robots to use as sentries around the base. Each one costs around $100 thousand; they’re weatherproof, unmanned ground drones with two way communication and high-tech sensors. They can be operated remotely or on their own and travel about seven miles on a single charge.

While they can’t bite, Parikh said it’s not a good idea to mess with them.

“If somebody is trying to steal the robot, it will actually flail,” he said. “If you get kicked by one of these, it’s going to hurt.”

Just wait until they become sentient.

“This is a springboard into the future of integrated defense,” said Squadron Commander, Maj. Jordan Criss. “This is only the first step and what we’re very excited to do is be that test and evaluations site which proliferates the rest of this technology for the rest of the Air Force.”

Speaking of the future of armed forces, United Kingdom Chief of Defense General Sir Nick Carter suggested last week that the British Army may one day soon be made up of “robot soldiers.”

He’s not kidding either. Carter stated that he believes the U.K. Army could be made up of 80,000 humans and 30,000 robots by the end of the decade.

The Daily Express reports that a military expert predicts robot soldiers are only around 15 years away from becoming real.

Charles Glar, an expert in robotics, automation, and artificial intelligence, says the United States military is on track, at its current rate of military spending, to create “deadly and highly effective” robot soldiers by 2035.

But the AI expert, who has helped develop spying robots and worked at America’s highly-controversial Defense Advanced Research Projects Agency (DARPA), said the robots will not be humanoid creations resembling hollywood creation The Terminator – at least for now.

Mr Glar, owner of AI firm CYBUR, said: “These robots are most likely going to be terrain focused and not like a drone.

Oh, well, that makes me feel so much better.

“The robots will use AI to detect key patterns on the battlefield meant to aid soldiers in combat,” says Glar. “These kind of robots will be feeding information to soldiers and ariel support about the layout of the land and possible threats nearby. Think of these machines as a hub of information helping the military with positioning and decision-making.

“When many people think of robot soldiers they think of a big humanoid machines that eliminate everything in sight.”

“Although, that’s unfortunately probably a goal for some military units it’s certainly not going to happen anytime in the near future,” he continued. “What we are going to see as a product of the AI arms race are devices keen on gaining as much intel as possible in the fastest amount of time possible.”

So if these robot soldiers aren’t going to be out annihilating people, what purpose will they serve?

“The main features of devices like these will be to scan the environment and locate threats in real time allowing air support to accurately deploy defences on the ground correctly,” says Glar. “This includes detecting humans, projectiles and hidden items that might catch units off guard.”

Right. And once these artificially intelligent, uber-dexterous robots get that down, they’ll be looking for other ways in which they can gain superiority over humans.

Nice knowing you all.