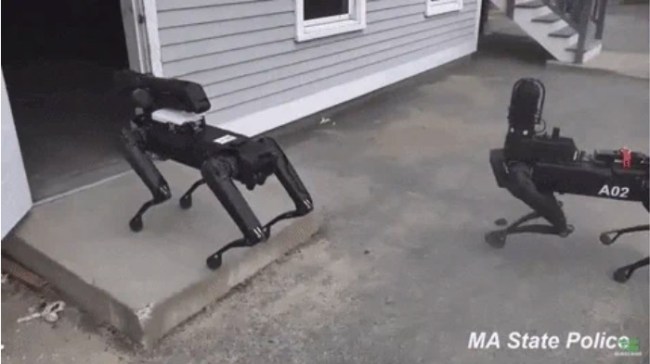 For the love of all that is holy, what is wrong with people? The Massachussetts State Police secretly tested out using Boston Dynamics’ robot dogs for three months? Do they not get that this exact kind of thing is how the robot overlords have been getting all their information for their impending uprising?

These Boston Dynamics people are really going to get us all killed someday with their robots that can work together, jump over obstacles, lift over 1,000 pounds, hunt us down in the woods, and fight back when we try to defend ourselves.

According to WBUR News, Massachusetts State Police is the first law enforcement agency in America to use Boston Dynamics’ robot dog named Spot.

The state’s bomb squad had Spot on loan from the Waltham-based Boston Dynamics for three months starting in August until November, according to records obtained by the American Civil Liberties Union of Massachusetts and reviewed by WBUR.

The documents do not reveal a lot of details on the robot dog’s exact use, but a state police spokesman said Spot, like the department’s other robots, was used as a “mobile remote observation device” to provide troopers with images of suspicious devices or potentially hazardous locations, like where an armed suspect might be hiding.

The fact that the ACLU is investigating this should raise some red flags, people.

“We just really don’t know enough about how the state police are using this,” said Kade Crockford, director of the technology for liberty program at the ACLU of Massachusetts. “And the technology that can be used in concert with a robotic system like this is almost limitless in terms of what kinds of surveillance and potentially even weaponization operations may be allowed.”

Uh yeah… look at this thing in action.

…while Spot and other tactical robots aren’t designed to kill, they still can. In 2016, Dallas Police sent a bomb disposal robot armed with explosives to kill a sniper who had shot at police officers and killed five. Experts said it was the first time a non-military robot had been used to intentionally kill a person.

That deadly potential, and lack of transparency about the state police’s overall robotics program, worries Kade Crockford, director of the technology for liberty program at the ACLU of Massachusetts. Crockford said they want to see a policy from state police about its use of robotics and a conversation about how and when robots should be used. State police didn’t say whether there’s a current policy about the use of robots, and the ACLU’s records request to the agency didn’t turn one up.

“Part of our early evaluation process with customers is making sure that we’re on the same page for the usage of the robot,” said Perry. “So upfront, we’re very clear with our customers that we don’t want the robot being used in a way that can physically harm somebody.”

He also added that they only lease the robots rather than sell them to customers so they can take them back if someone violates the agreement.

“We really need some law and some regulation to establish a floor of protection to ensure that these systems can’t be misused or abused in the government’s hands,” said Crockford. “And no, a terms of service agreement is just insufficient.”

Not when human beings continue to create robots and artificial intelligence that are smarter, more dextrous, more agile, more perceptive, more deadly, and more insane than actual people, hastening the robot revolution and our very own demise as a species. (Not that anyone cares.)

As YouTube viewer Mike Rotch wrote in the comments of the video below, “The sound of those footsteps will be the last thing you ever hear one day.”

That is some scary sh*t.