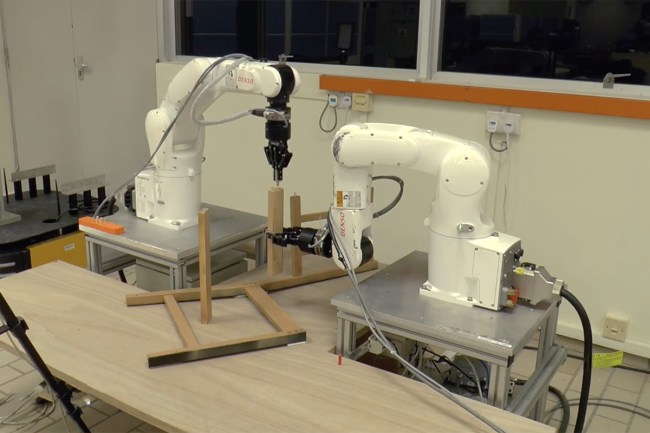 The technological advances implemented in robots has been astronomical in such a short period of time. In just the past month, we’ve learned that Boston Dynamics, one of the most cutting-edge robotic companies on the planet, has created a robot that can not only open doors but fight against human resistance.

Boston Dynamics CEO Marc Raibert said that he believes “robotics will be bigger than the internet” in the not-so-far away future.

And he’s not the only one who believes that. Two engineers from Singapore have created dual robots that are capable of doing relatively complex tasks in minutes.

Engineers at Nanyang Technological University used a 3D camera and two robot arms kitted out with grippers and force sensors to take on the challenge of building a ‘Stefan’ chair [from IKEA].

The robots completed the task in 20 minutes and 19 seconds – with more than half that time spent planning moves.

The actual assembly of the chair only took them nine minutes – a job which typically takes a person 10-15 minutes to complete, an Ikea spokesman told the Guardian.

The engineers claimed the robots copied human senses during the building process.

Dr Quang-Cuong Pham said that this is a sign that robots could move on from industrial assembly lines to take on more complicated tasks.