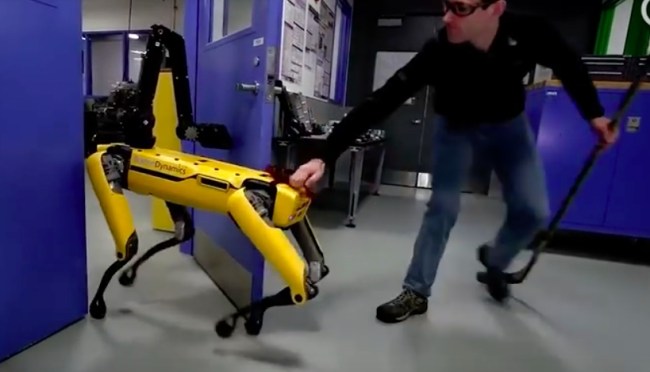 Last week, we brought you the news of Boston Dynamics’ SpotMini acquiring the ability to open doors. While the cutting-edge robotics company is highly secretive, it has been consistently teasing us with the highly-anticipated robots capabilities as of late.

We already know that the all-electric, four-legged robot can pick up and handle objects using its 5 degree-of-freedom arm and perception sensors. We know that the robot weighs 66 pounds, stands just over two-and-a-half feet, and can go for about 90 minutes on a single charge. We know that Boston Dynamics founder and CEO Marc Raibert said that he believes “robotics will be bigger than the internet.”

Now we know that they are beginning to fight back, and we must put aside our differences and stop it. Check out the video below.

The robot is doing all this fighting autonomously and is able to correct for extraneous forces while completing a given task.

According to the Guardian, Boston Dynamics describes the video as “a test of SpotMini’s ability to adjust to disturbances as it opens and walks through a door” because “the ability to tolerate and respond to disturbances like these improves successful operation of the robot.”

It’s unclear how Boston Dynamics will use SpotMini, but as Wired points out, the formerly Google-owned company developed the robot’s older brother, BigDog, as a pack mule for the military. The Marines rejected it because it was too noisy.

My prediction: by 2050, you will know someone married to a robot.