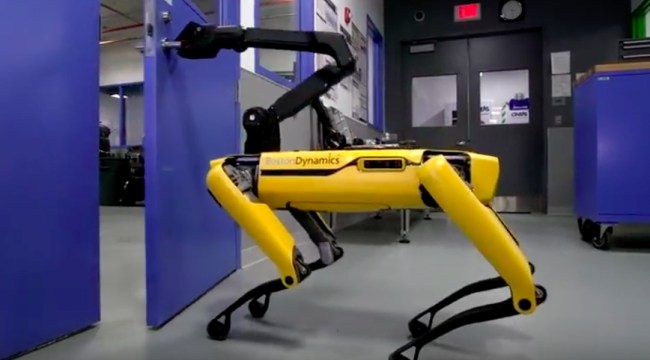 Back in November, Boston Dynamics founder and CEO Marc Raibert said that he believes “robotics will be bigger than the internet.” Raibert is head of one of the most cutting-edge robotic companies on the planet, and builds robots that look like humans and animals.

When robots have the capacity to for mobility, dexterity, and autonomous perception, they will be able to entertain us, deliver packages and assist with security functions, emergency response and construction, says Raibert.

Three months ago, Boston Dynamics gave us an update on the highly-anticipated SpotMini.

The SpotMini is an all-electric, four-legged robot that can pick up and handle objects using its 5 degree-of-freedom arm and perception sensors. The sensor suite includes stereo cameras, depth cameras, an inertial measurement unit, and position/force sensors in the limbs that help with navigation.

The robot weighs 66 pounds, stands just over two-and-a-half feet, and can go for about 90 minutes on a single charge.

Boston Dynamics released a new video of the SpotMini, and now it can evidently open doors.

I don’t know about you guys, but I’m locking my goddamn door tonight.