Robots Can Now Solve A Rubik’s Cube, One-Handed, In Their Latest Step Towards Becoming Our New Overlords 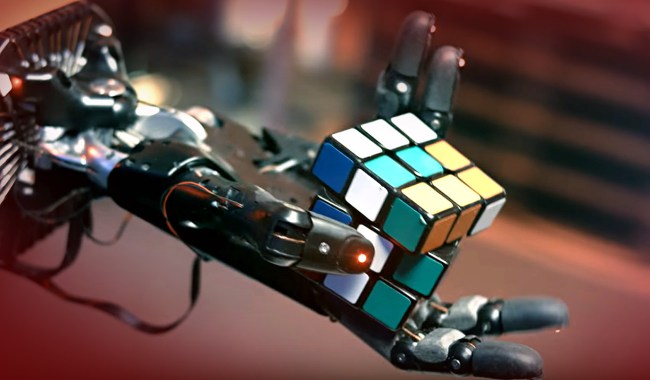 This latest “achievement” is brought to us by OpenAI, the corporation founded by Elon Musk, Sam Altman, and others in the tech industry.

That’s right. Elon Musk, the same guy who once called the commercialization of artificial intelligence “our biggest existential threat,” is one of the largest investors in this venture.

OpenAI stated on their website, “Solving a Rubik’s Cube one-handed is a challenging task even for humans, and it takes children several years to gain the dexterity required to master it. Our robot still hasn’t perfected its technique though, as it solves the Rubik’s Cube 60% of the time (and only 20% of the time for a maximally difficult scramble).”

So we still have time to turn back.

And we should, because as they demonstrated, the robot hand can even solve the Rubik’s Cube when researchers mess with it by doing things like tying two of its fingers together, throwing a blanket over it, poking it with a pen, and making it wear a rubber glove.

Oh, did I mention that OpenAI’s robot hand’s definition of success is doing it in just 15 rotations? And at the most difficult level it can do it in just 26 turns?

“The reason [we were] excited to work on the Rubik’s Cube task is that it really requires human-level dexterity,” Matthias Plappert of OpenAI told VentureBeat. “It’s a [highly] complicated task in the sense that you need to really precisely control your fingers in order to rotate the [cube] faces. [We] wanted to see how far [we could] push this approach that we had developed initially, for last year’s release.”

So how does the robot hand do it? As you can imagine, it’s complicated, but it is assisted by the fact that it can draw upon 13,000 years of cumulative experience.

ADR-trained models adjust their behavior to accomplish goals by implementing learning algorithms internally, which the team hypothesizes occurs when the distributions are so large that the models can’t memorize special-purpose solutions (due to their finite capacity). ADR continues the training cycle as long as the models’ accuracies don’t dip below a predefined threshold.

And once again I ask, why, oh why, do human beings continue to create robots and artificial intelligence that are smarter, more agile, more perceptive, more deadly, and more insane than actual people, hastening the robot uprising and our own doom as a species?