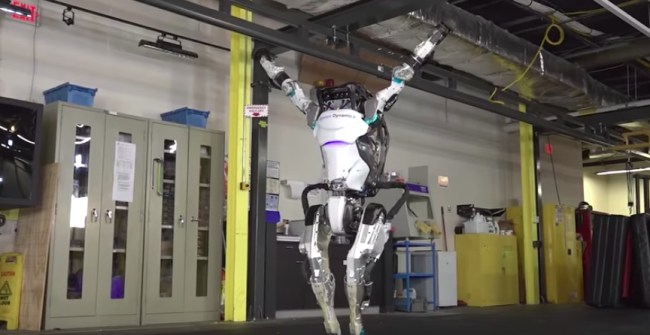 So the big global news this week surrounds the impassioned climate change speech of a 16-year-old Swedish girl named Greta Thunberg at the U.N. Climate Action Summit. She said that the remaining CO2 budget will be entirely gone within less than 8 1/2 years, deeming humans royally fucked.

Please don’t listen to her.

*clears throat* Boston Dynamics is building a robot army that is growing so technologically advanced and physically formidable we’ll be lucky for our species to survive long enough to be gassed out by climate change in eight years.

With all due respect to Greta, a 1.5 degree global temperature rise seems like a pretty good deal when faced with ROBOTS DOING FUCKING GYMNASTICS.

After news broke that Boston Dynamics let its robot dog, Spot, out of its laboratory for the first time and into the mainstream market, the cutting-edge robotics company has released a new video of Atlas, its 330-pound bipedal robot that is fully capable of hunting you down in the woods.

The Boston Dynamics description of the robot is as follows:

Atlas uses its whole body — legs, arms, torso — to perform a sequence of dynamic maneuvers that form a gymnastic routine. We created the maneuvers using new techniques that streamline the development process. First, an optimization algorithm transforms high-level descriptions of each maneuver into dynamically-feasible reference motions. Then Atlas tracks the motions using a model predictive controller that smoothly blends from one maneuver to the next. Using this approach, we developed the routine significantly faster than previous Atlas routines, with a performance success rate of about 80%.

To give you an idea of how fast these things are advancing, Atlas could “barely walk” in 2013 when the prototype was first developed.

Mom, if you’re reading this: I love you. I haven’t told you that enough.