Now Scientists Have Created A Flying Robot That Can Ride A Skateboard, Balance On A Slackline 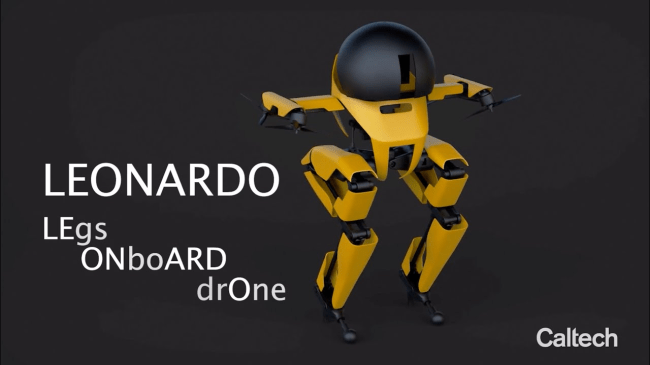 Scientists at the California Institute of Technology (Caltech) and Northeastern University in Boston are back at it, creating things that only serve to hasten the inevitable robot/artificial intelligence uprising.

Their latest creation is a robot named LEONARDO, short for LEgs ONboARD drOne, or LEO. LEO stands at 2.5 feet tall and is the first robot to achieve seamless integration of walking and flying.

LEO, a bipedal robot, does this by using its human-like knee, hip and ankle joints along with its rotor blades for arms.

These features allow LEO to not only walk, hop, and fly, it can also ride a skateboard and balance itself on a slackline.

The engineers who created LEONARDO were inspired by birds who use a combination of walking and flying movements to navigate terrain.

LEO is the first robot that uses multi-joint legs and propeller-based thrusters to achieve a fine degree of control over its balance.

Rsearchrs @Caltech built a bipedal #robot LEONARDO that combines walking wid flying to create a new locomotion which can walk a slackline, hop & ride a skateboard, th 1st robot to use multi-joint legs & propeller-based thrusters to achieve a fine degree of control ovr its balance pic.twitter.com/HpAPO9B2jc

“There is a similarity between how a human wearing a jet suit controls their legs and feet when landing or taking off and how LEO uses synchronized control of distributed propeller-based thrusters and leg joints,” Chung continued. “We wanted to study the interface of walking and flying from the dynamics and control standpoint.”

Bipedal robots are able to tackle complex real-world terrains by using the same sort of movements that humans use, like jumping or running or even climbing stairs, but they are stymied by rough terrain. Flying robots easily navigate tough terrain by simply avoiding the ground, but they face their own set of limitations: high energy consumption during flight and limited payload capacity. “Robots with a multimodal locomotion ability are able to move through challenging environments more efficiently than traditional robots by appropriately switching between their available means of movement. In particular, LEO aims to bridge the gap between the two disparate domains of aerial and bipedal locomotion that are not typically intertwined in existing robotic systems,” says Kyunam Kim, postdoctoral researcher at Caltech and co-lead author of the Science Robotics paper.

The research team believes “the technology designed for LEO could foster the development of adaptive landing gear systems composed of controlled leg joints for aerial robots and other types of flying vehicles.”

One example they cite would be equipping the future Mars rotorcraft with legged landing gear like LEO’s that will help with maintaining balance while landing, reducing the risk of failure under challenging conditions.

The next step, according to the scientists, is to make LEONARDO even smarter and more autonomous “so that the robot can understand how much of its weight is supported by legs and how much needs to be supported by propellers when walking on uneven terrain.”