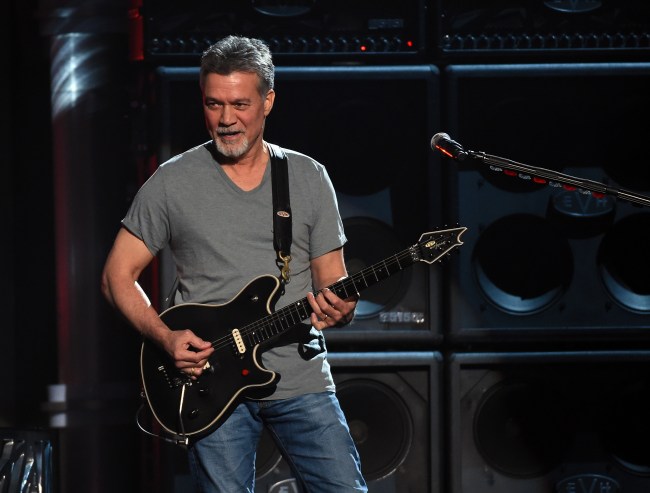 Legendary guitarist Eddie Van Halen has reportedly passed away at age 65 after a long battle with throat cancer according to a report from TMZ.

Sources directly connected to the rock star tell us … he died at St. Johns Hospital in Santa Monica Tuesday. His wife, Janie, was by his side, along with his son, Wolfgang, and Alex, Eddie’s brother and drummer.

We’re told in the last 72 hours Eddie’s ongoing health battle went massively downhill — doctors discovered his throat cancer had moved to his brain as well as other organs.

Rock and roll lost a great man today. Eddie Van Halen, your guitar was legendary, and your music will live on forever.

Oh man, bless his beautiful creative heart. I love you Eddie Van Halen, an LA boy, a true rocker. I hope you jam with Jimi tonight. Break through to the other side my brother. ❤️❤️❤️ https://t.co/XpcTlPJq9A

RIP to a real one, what an innovative and influential musician. so many people want to play like eddie van halen still to this day. pic.twitter.com/XKRlKelQR9

I am in complete and utter shock over the news of Edward Van Halen’s passing…Very few musicians ever come along that change the entire landscape of their instrument and King Edward was one of those few. One of the G.O.A.T! #RIPEVH #RIPEdwardVanHalen 😢😢😢 pic.twitter.com/1uuMLt1cvv

I have always been a fan but seeing EVH through the love of @CalebRapoport and the joy of being in @NerdHalen has invigorated my love for Eddie.

"The main reason I squeeze so many tricks out of a guitar is out of necessity. I couldn't afford the pedals, the fuzz box and all the toys everybody else had. So I did all I could to get all the sound I could out of my fingers." – Eddie Van Halen pic.twitter.com/24sGOEcjNk

RIP Eddie Van Halen, 65.
One of the greatest guitarists in music history and a delightfully warm, funny guy.
‘To hell with the rules, if it sounds right – then it is.’ pic.twitter.com/AZIAEMC5Pm