Rockstar Games Updated Their Website, Igniting Rumors Of ‘Bully 2’ And ‘GTA 6’ Being Released 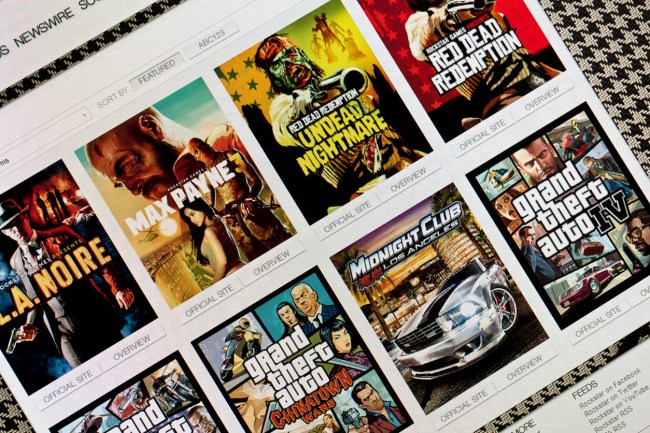 Video game enthusiasts are excited about the possibility of Rockstar Games dropping sequels for two of their most beloved gaming titles — Grand Theft Auto and Bully. The only problem is that it is all speculation based on subtle changes on the Rockstar Games website.

Rockstar Games updated its website this week with some new artwork, and gamers are convinced that the changes indicate that a new game is going to be announced in the near future.

One image features a gold robot woman wearing heels embracing the Rockstar Games “R” and star logo. There is also a bucket of champagne nearby and rose petals on the ground.

Some people thought that because the champagne bottle said “1998,” that the game would be set in the 1990s. However, it probably is a reference to the year that Rockstar Games was established.

What ever game it is, will take place in the 90s pic.twitter.com/c2nuRhitpQ

There was another image that said: “Killing dreams. Murdering hope. Fighting the righteous. Bullying the weak.”

Rockstar Games is teasing something pic.twitter.com/PJRr4DI39W

People are convinced that Rockstar will announce that they are releasing Bully 2 because it said “bullying the weak.”

RELATED: New Rumors Hint Where And When ‘GTA 6’ Might Be Set, Possible Release Date Window

Another sleuth believes that Rockstar is getting ready to announce GTA VI because there are 16 logos and “GrandTheftAutoVI” has 16 characters.

There was this theory that Rockstar is releasing four different games — Max Payne, Manhunt, GTA6, and Bully 2.

In 2016, Rockstar Games changed its Twitter logo to tease the reveal of Red Dead Redemption II.

There is speculation that Rockstar Games will release GTA VI for the upcoming PS5 and Xbox Series X that debut in the 2020 holiday season.

Whether it is Bully 2, GTA 6 or L.A. Noire, we will gladly welcome any new Rockstar game. Whatever video game it is, it will be the first game announced since Rockstar Games co-founder Dan Houser left the company.

RELATED: ‘GTA 6’ On The Way? Rockstar Job Ads Are Hiring For ‘Nex-Gen’ Game On PS5 And Next Xbox