Ron Burgundy Did Play-By-Play At An L.A. Kings Game And It Was As Amazing As You’d Expect 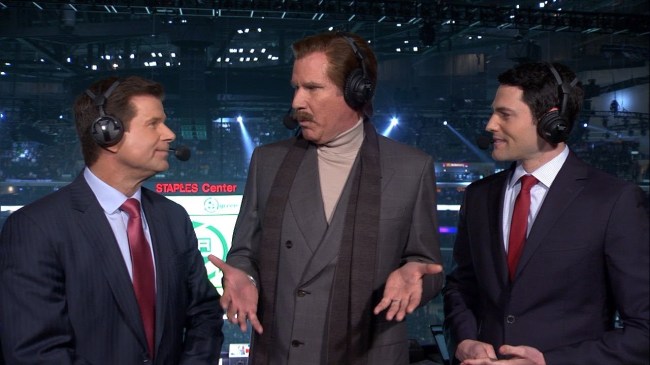 Will Ferrell has played a number of outrageous characters over the course of his career but I’d argue none of them are as iconic as Ron Burgundy, the infinitely quotable anchorman who served as my comedic idol during my younger years.

It’s hard to believe it’s been fifteen years since Anchorman hit theaters, but luckily for us, the actor has reprised the character on a few occasions, including the time he previewed an MLS game last year and left us begging for more.

Thankfully, Ferrell gave the people what they want on Thursday night when he stepped into the booth at a Los Angeles Kings game dressed in his finest turtleneck and (presumably) a sharp pair of pleated pants to call the action on the ice and he did not disappoint.

While Burgundy’s loyalties lie with the beautiful city of San Diego, the city doesn’t have a hockey team of their own so he settled for the next best thing and spent the night trash-talking the San Jose Sharks, who—as Burgundy reminded us—have zero Stanley Cups to their name.

Did you know Sharks goaltender Martin Jones is a puppeteer in the off-season? Well, now you do.

Of course, it’s tough to call a game without a little refreshment at some point and Burgundy decided to turn to his trusty sidekick—a glass of milk, which was not a bad choice in this situation.

"This burrito is delicious, but it is filling" meets "Milk was a bad choice" and it's everything we've ever wanted from Ron Burgundy 🌯🥛#GoKingsGo | @_Attendee pic.twitter.com/GlbVJoyGg5

Here’s to hoping this isn’t the last time we see Burgundy step into the booth.