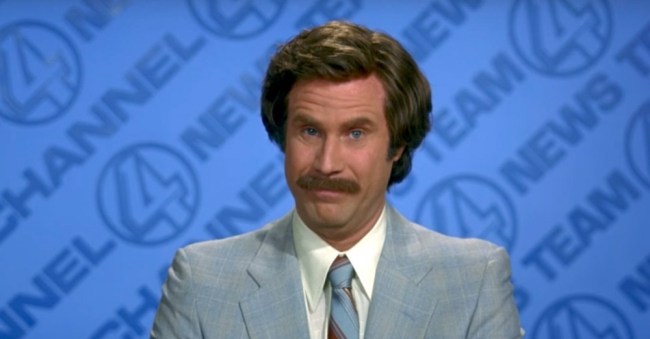 Will Ferrell is one of the like 30 owners of the new Major League Soccer team Los Angeles FC, so naturally, Ron Burgundy of Anchorman had to weigh with his thoughts on the franchise’s opener versus the Seattle Sounders.

Before we get to that I need to ask a few questions since I am not much of a soccer follower.

(1) What exactly is a Sounder?

(2) Doesn’t Los Angeles already have a MLS team in the Galaxy?

(3) Since they do (I just double-checked) then you’re telling me that there is a very good chance that not just one, but TWO professional soccer teams might out draw the Chargers when it comes to attendance at their games? Because this crowd also looks bigger than any of the crowds the Chargers had.

Also, I wasn’t kidding about the team having 30 owners. It really does. Among them, including Ferrell are Magic Johnson (what doesn’t he own a part of?), Nomar and Mia Hamm-Garciaparra, YouTube co-founder Chad Hurley, and Tony Robbins.

Anyway, back to Ron Burgundy. Little known fact: the Seattle Bounders (as Burgundy referred to them) were apparently founded in 1802 by the Germans and the Haitians.

Yeah… Will Ferrell slash Ron Burgundy should just announce every sporting event from now on.

Oh yeah, LAFC won their first game 1 to 0 so they’ve officially never suffered a loss in the history of the franchise.