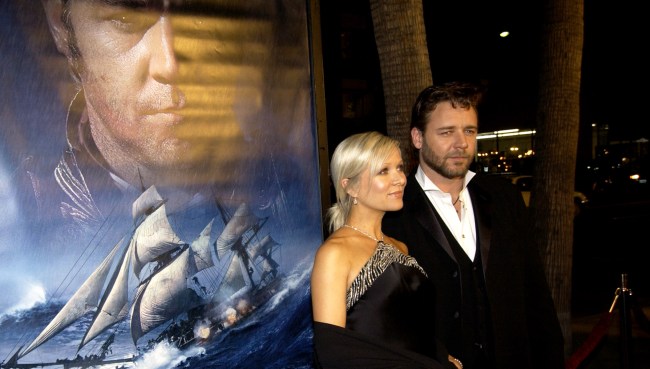 With all of the stress surrounding the seemingly never-ending pandemic (not to mention the election) many people are finding it difficult to get a good night’s sleep. (And, no, sleeping with the heat turned up to 90 degrees doesn’t help.)

So, in an effort to help people out, someone on Twitter offered up this suggestion…

Lots of folk complaining about lack of sleep during the Pandemic. May I recommend Master And Commander starring the usually captivating, attention-grabbing Russell Crowe. I've never made it past the ten minute mark. You're welcome. And thanks Russell. @russellcrowe pic.twitter.com/SD2runOpMA

Master and Commander: The Far Side of the World was nominated for 10 Academy Awards following its release in 2003, winning in the Best Cinematography and Best Sound Editing categories.

Plus, it grossed $212 million worldwide on a $150 million budget and earned its star Russell Crowe a Golden Globes nomination.

It’s also, as one of my co-workers put it, was very good, but about as exciting as eating cold bread in the rain.

Crowe, who was tagged in the tweet, wasn’t happy that someone suggested using his film as a sleep aid so he went and pulled out the “kids these days” card.

“That’s the problem with kids these days,” Crowe responded. “No focus. Peter Weirs [sic] film is brilliant. An exacting, detail oriented, epic tale of fidelity to Empire & service, regardless of the cost. Incredible cinematography by Russell Boyd & a majestic soundtrack. Definitely an adults movie.”

That’s the problem with kids these days.
No focus.

Peter Weirs film is brilliant. An exacting, detail oriented, epic tale of fidelity to Empire & service, regardless of the cost.
Incredible cinematography by Russell Boyd & a majestic soundtrack.
Definitely an adults movie. https://t.co/22yjNtQRbg

Interestingly, many, MANY people on Twitter immediately jumped to Crowe’s defense of Master and Commander.

I guess if the movie was split into several 59 seconds TikTok clips you would have been able to watch it. The film is not the problem.

I teach naval history at the US Naval Academy.

I use this film in class as a starting point to discuss tactics, gunnery, ship architecture, great power competition, discipline in the age of sail, shipboard food & life, & leadership.

It is the perfect film, sir.

YOU SAID IT PERFECT RUSSELL BUBBA. THE KIDS DONT KNOW YOU TEACH THEM TO BE COME LEGENDS

Oh, well, if The Iron Sheik says it’s a great film, who are we to argue?

Thanks Russell. I'm 60 but I get your point. Love Unhinged. Greetings from Liverpool, I.