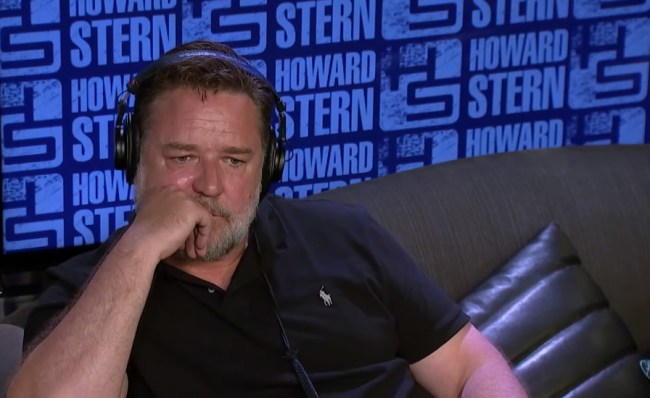 Via The Howard Stern Show

There are regular old regrets and then there are epic regrets that can linger with you for an entire lifetime and give you a sharp stabbing pain in your heart whenever you think about them. Unfortunately for Russell Crowe, he has the latter type of regret after turning down a role in Lord of the Rings that cost him $100 million.

On Wednesday, Russell Crowe was on The Howard Stern Show where he talked about how he got drunk and bought a dinosaur skull from Leonardo DiCaprio. Howard Stern also brought up a painful topic for Russell — how he turned down a role on the Lord of the Rings that cost him bigly.

Russell talked about the moment when he first realized that he was incredibly famous and he was completely taken aback. Russell was in Rome around 2000 after Gladiator was released in theaters, buying a watch for his wife-to-be. After making the purchase, Crowe walked out to the street and it was “jam-packed with people.”

Crowe went up to an Italian federal police officer and asked, “What’s going on man?” The cop responds, “You. You are going on.”

The producers offered Crowe the role of Aragorn and they guaranteed him to receive a whopping 10% of the movies’ profits. Crowe was ready to take a part in the cinematic version of the J. R. R. Tolkien novels. Then Crowe met with the movies’ director, Peter Jackson and things changed.

RELATED: Johnny Depp Claims Amber Heard ‘Painted On’ Her Bruises, Severed His Finger And Defecated In His Bed In Court Filings

“I didn’t think Peter Jackson actually wanted me on the film,” Crowe told Howard Stern this week. “I think he was forced into talking to me (by the studio) because there was a moment in time where everybody wanted me in every (movie).”

“I can hear his voice and my instinct was that he had somebody else in mind, which turned out to be Viggo (Mortensen),” Russell said of his fellow New Zealander. “And he should be allowed to hire whoever he wants.”

Stern reminds Russell Crowe that he missed out on $100 million, which Russell Crowe probably needs no reminders. “Never thought about it. Only in situations like interviews where people are polite and kind to add sh*t up for you,” Crowe joked about missing out on the fortune. If only Crowe took that LotR role, he could have afforded to keep the dinosaur skull.

Don’t feel too bad, Russell Crowe has a net worth of $95 million.

In actuality, Crowe wasn’t the first actor offered the LotR role. There are reports that Daniel Day-Lewis was first offered the role and when he declined, Nick Cage was offered the part.

Stuart Townsend was cast, but Jackson felt he was too young for the role. That is when Crowe was offered the Aragorn role and when he declined, Daniel Day-Lewis was offered the part again.

RELATED: Awesome Story About A Fan Getting An Autograph From Keanu Reeves Goes Viral On Twitter For All The Right Reasons

Crowe also passed on playing Wolverine in the X-Men movie from 2000. “Even if I’d done the film, I wouldn’t have carried it through with the grace and the direction that Hugh (Jackman) gave it,” Crowe told Stern.

During the interview, Crowe also talked about how he was under FBI protection for nearly a year. “I still don’t understand all that, man,” Crowe says of the pre-9/11 situation. “Everywhere I went for best part of a year there was always guys around.”

Apparently, the terrorist organization Al Qaeda was making plans that they were going to kidnap celebrities. A French agent intercepted threats by terrorists in Algiers about kidnapping public figures around the world.