Johnny Depp Claims Amber Heard ‘Painted On’ Her Bruises, Severed His Finger And Defecated In His Bed In Court Filings 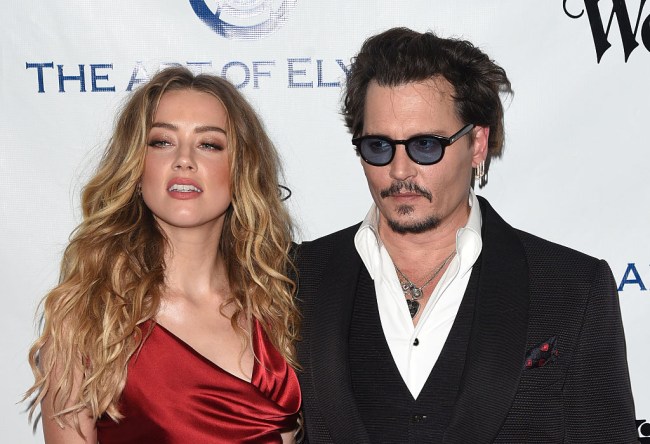 Johnny Depp and Amber Heard finalized their tumultuous divorce in January of 2017, but over two years later the bitterness between the celebrity couple is as strong as ever. New court filings show Depp accuse Heard of domestic abuse, claims that his ex-wife faked her bruises by painting them on and she allegedly defecated in his bed.

Johnny Depp filed a defamation lawsuit in Virginia against his ex-wife in April 2019 after Heard wrote an op-ed for The Washington Post in December 2018. The article called Depp a “monster” and insinuated that he physically and emotionally abused her during their relationship.

Depp responded to the allegations of domestic violence by asserting that he was the domestic abuse victim in the celebrity relationship. Depp’s defamation lawsuit sued Heard for $50 million in damages.

On Monday, details of the ongoing legal battle between Heard and Depp were released and they are something. Depp’s legal team claims that the actor never assaulted Heard and the allegations are “categorically and demonstrably false.”

Lawyers for Depp allege that Heard faked her injuries and “painted on” bruises on her face in order to “fabricate” claims of domestic violence against her then-husband. The photos of the bruises were used by Heard to get a restraining order against Depp from a Los Angeles court.

“I have denied Ms. Heard’s allegations vehemently since she first made them in May 2016 when she walked into court to obtain a temporary restraining order with painted-on bruises that witnesses and surveillance footage show she did not possess each day of the preceding week,” Depp states in new court papers.

Depp says that he is the true victim of domestic violence from the relationship. The Depp legal team says that while Heard was allegedly “faking” her injuries, Heard inflicted “serious bodily injury” on Depp.

Depp also claims that Heard attacked him “while she was under the influence of a mix of prescription amphetamines and non-prescription drugs with alcohol.” The Pirates of the Caribbean actor said that Heard threw a vodka bottle at him and severed his finger.

“While I was in Australia filming a movie approximately one month after I married Ms. Heard, on a day where my then-lawyer tried to discuss with Ms. Heard the need that she sign a post-nuptial agreement with me, she went berserk and began throwing bottles at me,” the court filing reads. Depp was filming the Pirates of the Caribbean: Dead Men Tell No Tales movie at the time and his injury caused the production to be temporarily shut down.

“The first bottle sailed past my head and missed, but then she threw a large glass vodka bottle,” the court document states. “The bottle struck the marble countertop where my hand was resting and exploded. The projectile’s impact shattered the bone in my finger and entirely severed the tip of my finger.”

“I had to have 3 surgeries to reconstruct my finger and contracted MRSA three times,” Depp said in his declaration.

Depp’s legal team introduced of Depp’s severed bloody finger and it appears that the tip has been cut off. At the time, Depp left the movie’s production and traveled back to the U.S. to have what was described as an on-set injury. There is also paparazzi photos of a month after the alleged incident where Depp and Heard are getting off his private jet in Australia and his finger is wrapped in a scarf.

Johnny Depp accuses Amber Heard of severing his finger by hurling a bottle of vodka at him https://t.co/mWiOy1WTYO pic.twitter.com/zoTijJsJEU

“Throughout our relationship, Ms. Heard also committed domestic violence against me,” Depp said in court docs. “She hit, punched, and kicked me. She also repeatedly and frequently threw objects into my body and head, including heavy bottles, soda cans, burning candles, television remote controls, and paint thinner cans, which severely injured me.”

Then there are the shocking claims that Amber Heard defecated in Depp’s bed. “As a result of the years of domestic abuse I had suffered at the hands of Ms. Heard—most recently the April 21 physical attack and defecation on my bed sometime before she and her friends left the next morning—I resolved to divorce Ms. Heard.” So she literally sh*t the bed? “Hurl all the vodka bottles at my head you want and sever my finger, but take a dump on my 800-thread count Egyptian cotton sheets is too much to take, it’s the last straw.”

Heard and Depp were fighting so much during their marriage because Amber was allegedly having an extramarital affair with Billy Bob Thornton and dating Elon Musk.

Amber Heard’s legal team has responded to Depp’s court filings with their own statement. “It is regrettable that it will take a judge to finally end the persistent harassment of Ms. Heard by Mr. Depp, but Ms. Heard will take whatever action is necessary to vindicate the truth.”

“The evidence in this case is clear: Johnny Depp repeatedly beat Amber Heard. The increasingly desperate attempts by Mr. Depp and his enablers to revive his career by initiating baseless litigation against so many people once close to him — his former lawyers, former managers, and his former spouse — are not fooling anyone. In light of the important work done by the #TimesUp movement highlighting the tactics abusers use to continue to traumatize survivors, neither the creative community nor the public will be gaslit by Mr. Depp’s baseless blame-the-victim conspiracy theories.”

Speaking of legal teams, Depp is being accused by Buckley LLP of not paying his legal bills. Depp is said to own the legal firm $347,979. Depp’s financial difficulties in recent years have been well-documented.

The Depp/Heard defamation case is literally a sh*tshow.