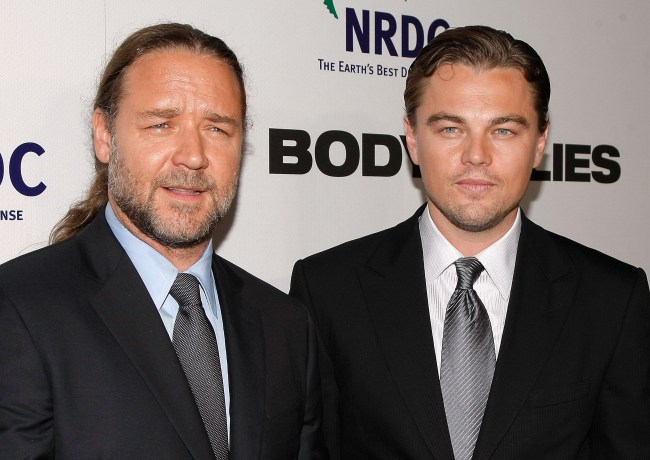 Russell Crowe once got drunk at Leonardo DiCaprio’s house and bought a dinosaur skull. Celebrities get drunk and buy dumb crap they don’t actually need. Celebrities, they’re just like us!

Russell Crowe appeared on The Howard Stern Show on Wednesday and told an amazing Hollywood story. How he indulged in a few too many vodka beverages and ended up buying a dinosaur skull from Leonardo DiCaprio. Just your typical Friday night as a Hollywood actor.

The drunken transaction started when DiCaprio told Crowe, “I got this one (dinosaur skull), but there’s another one coming on the market that I really want so I’m trying to sell this one.” Crowe enthusiastically replied, “Well, I’ll buy it.”

Crowe said his kids were super interested in dinosaurs at the time and he bought it for them. I feel like my dad let me down when I was consumed with learning everything about dinosaurs and not one dino fossil was purchased by my father.

Crowe said DiCaprio was “pretty cool about” selling this prehistoric artifact and said, “Just give me what I paid for it.” Russell added, “I think he paid 30, 35 grand for it.” The Gladiator actor also admitted that “there was a bunch of vodka involved in the transaction.”

DiCaprio was very cool about it. If some famous Hollywood actor like Russell Crowe who has a net worth of $95 million was drunk at your house and wanted to buy your dinosaur fossil, you could get way more than $35,000. Russell Crowe is an actor, not some paleontologist. Leo could have easily sold that dinosaur skull for at least a million that night.

Crowe doesn’t remember what kind of dinosaur it was, but said: “it wasn’t a very popular dinosaur.” We know that it was the skull of a mosasaur. We know it was a mosasaur because Crowe was forced to sell the dinosaur skull when he was going through a very costly divorce.

RELATED: Bella Thorne And Rapper Mod Sun Are Having The Pettiest Breakup That We Have All Dealt With

Over a year ago, Crowe auctioned off over 225 of his most prized possessions to help pay for his divorce to his ex-wife Danielle Spencer, who he was married to for nearly 15 years. The auction was done by Sotheby’s Australia and the actor called it: “Russell Crowe: The Art of Divorce.”

The mosasaur was a marine reptile that lived in the Late Cretaceous period, between 65 million to 100 million years ago. The mosasaurs breathed air and hunted anything, including smaller mosasaurs, in warm, shallow seas. The mosasaur had a double-hinged jaw and a flexible skull so they could eat their prey in one bite.

RELATED: Justin Bieber Backtracks On Challenging Tom Cruise To A Fight, Admits The Actor Would ‘Whoop His Ass’

The mosasaur had a body shape similar to that of modern-day monitor lizards and was typically was about 13-feet-long. But the mosasaurus hoffmannii were as large as 56-feet-long and weighing 50 tons. The most famous depiction of a mosasaurus was the humungous creature from Jurassic World that

This isn’t the first time that a Hollywood actor has blown money on a dinosaur. During his heyday, Nick Cage had a net worth of over $150 million (His 2019 net worth is said to be only $25 million). Nick was facing a financial crisis and was deeply in debt and was forced to sell off some of his most extravagant purchases.

Cage racked up the insurmountable debt after buying such things as 15 different multi-million-dollar properties, a Gulfstream jet, the first Superman comic from 1938 that had a price tag of $150,000, a Lamborghini that was confiscated from the Shah of Iran worth $450,000, a $150,000 pet octopus, and a 7-million-year-old dinosaur skull that he spent $276,000 on.

Coincidentally, Cage acquired the prehistoric skull by outbidding Leonardo DiCaprio. It was later revealed that the dino skull was stolen and had to be returned to the Mongolian government. You can read more about Nick Cage’s exorbitant purchases HERE.