Courtney Love Says Ghost Of Kurt Cobain Haunted And Talked To Her Once, Gets Angry At Marilyn Manson Sex Question 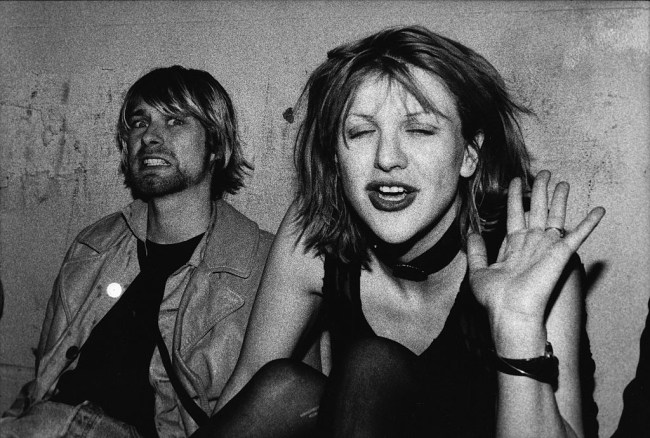 Courtney Love said that she saw the ghost of Kurt Cobain and the spirit of her husband and the legendary Nirvana frontman actually talked to her. Also in the new interview, Love became angry and refused to answer a Marilyn Manson sex question.

Tom Ford asked Courtney: “What have you learned from everything that you have been through in life?” And the singer responded: “I’ll borrow from Patti Smith: ‘Kids, take care of your teeth.’”

Actress Gwyneth Paltrow asked Love: “How has grief shaped your life?” Courtney replied by saying: “There are these stages in Buddhism: hell, hunger, animality, anger. All anyone wants is a proper service, proper burial, all that stuff. But it’s really hard to deal with emotionally.”

“There’s shock. There’s turmoil. There’s lament. There’s relinquishing. There’s remembrance. There are huge swings of emotion. There’s fake smiling. There’s ugly crying,” Courtney continued. “I really felt like there were a couple of times where I’d get over it, and then it would come back a few years later.”

Also in the Interview Magazine piece, Marilyn Manson asked Courtney a risqué question about her love life. The goth rocker asked, “Who was your most memorable sexual experience?”

Courtney started to answer the question by saying: “Somebody told me that in the Ariana Grande song I listened to this weekend, she names her exes or something. Is that true? Please, next, or whatever. I didn’t hear it. There’s this sport thing with girls like Tay Tay and Ariana, where they go out with famous guys and then sing about them, which of course I used to do, too. But it wasn’t as much of a sport back then.”

Then Courtney gets angry over the question and refuses to answer the query. “Actually, no. Forget it. I’m not fucking answering this sh*t,” Love said.

Actor Joshua Boone asked Love the interesting question of: “Have you ever seen a ghost?”

“When I moved to Hancock Park from Seattle with Frances and Edward [Norton, Love’s ex-boyfriend], I saw Kurt in a chair for a moment and he said hi to me and then he left,” Love said of the paranormal encounter with her deceased husband.

You’d think Kurt could have stuck around a little longer, reminisced, maybe give Courtney a new song he wrote in heaven. But it was a quick “Hi” and goodbye.

In a 2015 interview with The Hollywood Reporter, Love talked about Kurt’s “spirit” being all around and influencing Brett Morgen, the director of Kurt Cobain: Montage of Heck. “I think Brett spent a lot of time with Kurt’s spirit, and I think his spirit keeps coming out, which is why I keep coming back for more punishment,” Love said.

In July of 2016, Love posted a photo of Kurt holding Frances Bean Cobain when she was a baby and talked about the “beautiful ghosts of our past.”

The pic had the caption of: “Sometimes the best and worst times of your life can coincide. It is a talent of the soul to discover the joy in pain—-thinking of moments you long for, and knowing you’ll never have them again. The beautiful ghosts of our past haunt us, and yet we still can’t decide if the pain they caused us out weighs the tender moments when they touched our soul. This is the irony of love. Shannon L. Alder’ #love #canyouseeus?”

Following Kurt Cobain’s suicide on April 5, 1994, Courtney Love did an interview with Barbara Walters in 1995 where she talked about her childhood, Kurt’s death, and why she thinks she is partly responsible for his suicide.

RELATED: Kurt Cobain Knew Dave Grohl Had An Incredible Voice And Was Jealous Of His Talents