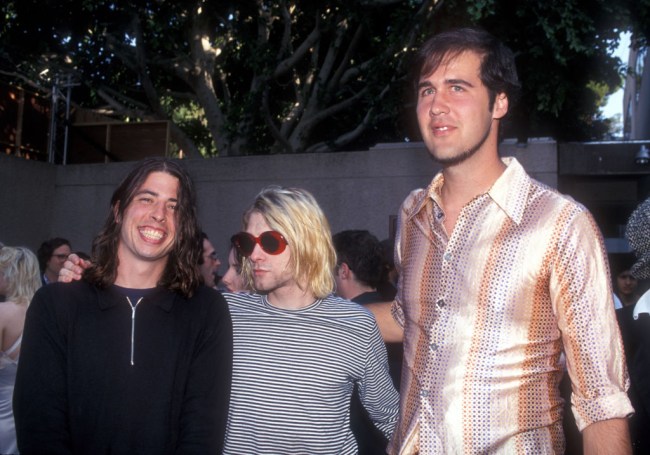 Long before the Foo Fighters, Kurt Cobain knew Nirvana drummer Dave Grohl had a tremendous voice and he was envious of that fact. This is the little-known story that is being told by Danny Goldberg, the music manager for Nirvana during their heyday in the early 1990s.

In Goldberg’s new memoir titled Serving the Servant: Remembering Kurt Cobain, the Nirvana manager recalls that Cobain knew that Grohl had an incredible voice. And not only did the Nirvana frontman know that his band’s drummer had a great voice, but Cobain was even jealous of Grohl’s vocal talents.

“Kurt just said to me, ‘I don’t think you realize how good a singer Davie is, but I hear him singing harmonies every night,’” said Goldberg, who was with the band from 1990 to 1994. “It was like he was really doing it so I would know this because there was this very fraternal side of him and a sweet side of him, but also it had a touch of envy in it. I mean he was competitive.”

In 2014, Grohl told the story of how he shared some of his demos with Cobain. “Kurt heard that, and kissed me on the face, as he was in a bath,” Grohl said on the HBO documentary series Sonic Highways. “He was so excited. He was like, ‘I heard you recorded some stuff. … I was like, ‘Yeah.’ He was like, ‘Let me hear it.’ I was too afraid to be in the same room as he listened to it.”

Grohl talked about joining Nirvana and said he was “lost” and “went through a really dark period where I couldn’t really even listen to the radio because it broke my heart just to hear music” after Cobain’s death by suicide.

Grohl has gone on to have quite his own singing career with the Foo Fighters. His band has released nine studio albums, four of which have won the Grammy Award for Best Rock Album; There Is Nothing Left to Lose, One by One, Echoes, Silence, Patience & Grace and Wasting Light. Overall, the Foo Fighters have won 11 Grammy Awards.

During Goldberg’s first meeting with Nirvana founder Cobain and Krist Novoselic, Kurt made it known that he was in charge of the band. “Kurt wrote the songs, he was the lead singer, he was the lead guitar player, he storyboarded the videos, he designed the album covers and he made the decisions.”

“For the first part of that meeting, he hardly said anything. Krist did a lot of the talking. Then, at one point, I asked them, ‘Do you want to stay on the indie label?’ — because you never know with punk bands,” Goldberg remembers. “And Kurt suddenly piped in, ‘No.’ Making it clear that he knew what he wanted, that he wanted to leave the indie and be on a major, and it also made it clear to me that he was the boss.”

Goldberg reminisced about his relationship with Cobain. “Sometimes I felt as close to him as a brother and other times he seemed a galaxy removed, barely perceptible.”

Goldberg gave a glowing account of what Cobain’s legacy means to the world of music. “He’s one of the greats,” Goldberg wrote in his book. “He’s somebody that touched people very deeply and very widely, which is a handful of people. Bob Marley’s on that list, John Lennon, Dylan, Edith Piaf, John Coltrane, Billie Holiday. He’s on that list of the greats.”