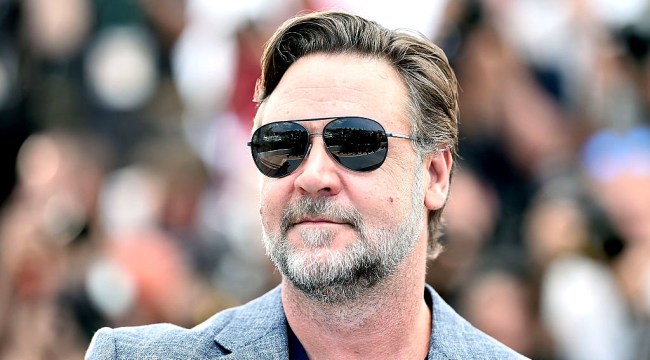 If you are a big fan of any of Oscar-winner Russell Crowe’s films then today is your lucky day. That’s because Crowe has decided to close out his marriage of almost 15 years to Danielle Spencer with an auction at Sotheby’s in Australia entitled “Russell Crowe: The Art of Divorce.” How awesome is that?

The over 225 items up for sale in Crowe’s “divorce auction” reads like a museum of film history inventory.

A selection of major works from the private collection of Russell Crowe will be auctioned by Sotheby’s Australia on 7 April 2018. A date of particular significance as both the actor’s birthday and wedding anniversary.

The sale represents the dispersal of a highly personal collection that was assembled by Crowe over many years, including those shared with his former wife, Danielle Spencer.

How great is it that he’s doing this on his birthday and wedding anniversary?

Up for auction are such collector’s items as Crowe’s leather jock strap from the movie Cinderella Man (hard pass), Denzel Washington and Ridley Scott’s seat backs from the film American Gangster, Captain Jack’s uniform from Master and Commander, and, wait for it, a fully functioning chariot from Gladiator!!

There’s also a pair of Bauer ice skates he wore in Mystery, Alaska, and a plethora of classic guitars, paintings, a 2001 Mercedes-Benz S500, and even three of Johnny Cash’s Australian Gold Records.

Oh yeah, one more item that’s pretty cool is the stunt cuirass worn by Crowe in the scene depicting the death of the character Maximus in Gladiator. Imagine having that for a conversation piece in your man cave? There are also wrist cuffs, a wooden training sword, an aluminum prop sword, his army leg wraps, and not one, but TWO LIFE-SIZE PROP HORSES from the film up for sale as well.

The 53-year-old Crowe told the Daily Telegraph that he is auctioning all of items to “create space for the future.”

Estimate peg the overall take for Crowe’s collection, which will be on exhibition from April 4-7 with the auction itself happening the evening of April 7 at Carriageworks in Sydney, could reach $2.8 million.