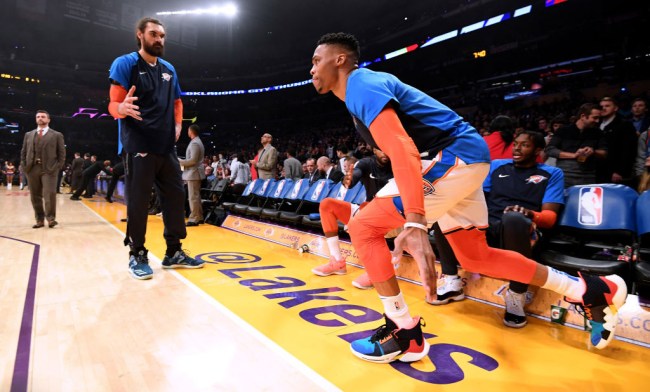 Russell Westbrook made quite the fashion statement on Wednesday for his game against the Lakers. No, I am not talking about the debut of his new signature shoe, the Why Not Zer0.2 (available here!). I am talking about what The Brodie wore as he entered the building for the game: a custom suit with matching OVEN MITTS.

Yes, you read that right. Westbrook wore oven mitts… and they even matched his damn suit. What… is going on with NBA players and their bizarre takes on fashion these days?

Soooo… why would Russell Westbrook have a set of matching oven mitts draped over his shoulders to a basketball game? That’s just one of the questions his unique look raised on Twitter.

where does this cat get these fits seriously?? LMAO

Lots going on in the world but I feel like it all stops when Russell Westbrook enters the building wearing oven mitts… pic.twitter.com/rooJNrddRa

Russ wore oven mitts to the game because he finna be cookin.

I’ll see myself out. pic.twitter.com/su4MzWfRer

Dropping 101 and getting 50 rebounds.

Close! He ended up with 16 rebounds.

Blow up boxing gloves in case Durant around. 😂

In his career, Russell Westbrook is shooting 2 of 14 from the field when he carries oven mitts into the arena

Also close! And considering Westbrook ended the night shooting 3-for-20 from the field, I am guessing that’s the last time we see him rocking some oven mitts to a game.