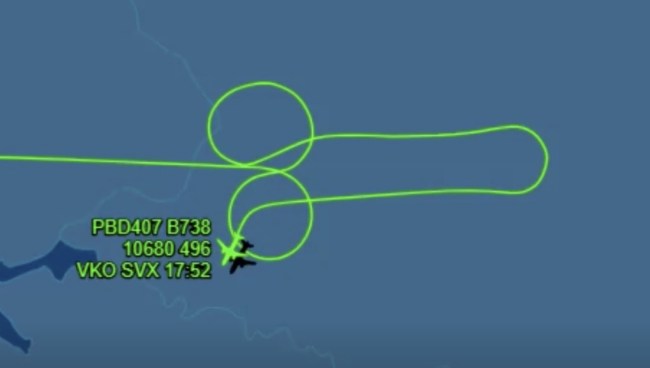 Russia’s biggest low-cost airline has fired one of its deputy bosses after a passenger plane took an interesting, unplanned route during a commercial flight last month. On November 11, Podeba Airline’s flight DP4007 from Vnukovo to Koltsovo was headed to its destination as planned with 102 passengers on board. About three quarters of the way through, the aircraft made a deliberate detour to outline a phallus on the flight path. The flight landed without incident 22 minutes later than was scheduled.

Per reports, the flight’s penis-related stunt was an attempt to show solidarity with Dzyuba. It is unclear whether the pilots received permission to carry out the maneuvers, but the Federal Air Transport Agency determined that the flight could have posed a safety hazard.

“We do not know what exactly could have been imagined in the flight path of our aircraft, but it is possible that the captains of Pobeda expressed their support to the captain of the [Russian football] national team Artyom Dzyuba and showed their attitude to his persecution,” a spokesperson for the airline said.

The agency’s commission blamed the Podeba Airlines’ company management for the incident and the recently-fired boss appears to have taken the fall. Dzyuba is slated to rejoin the roster when international matches resume next March, and it’s more fun to believe that the penis path was the reason.