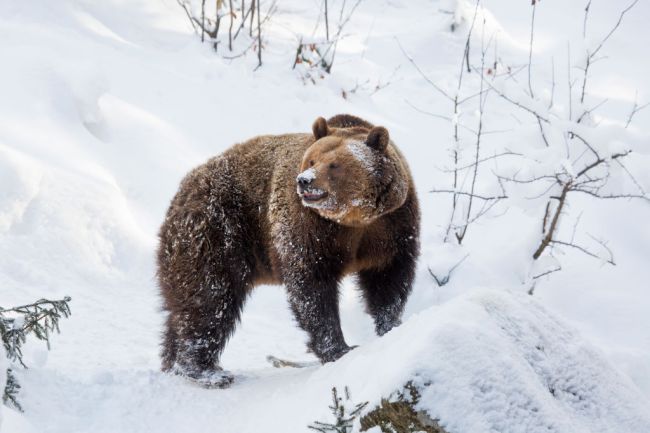 Russia needs to get it together. A frightening scene unfolded on the streets of Nizhnevartovsk earlier this week when a bear was seen chasing a local commuter down a busy street through the snow. The man was going about his day and took a phone call on the side of the road. Out of nowhere emerged a BROWN BEAR that had escaped from a private zoo. Confused and unaware of its surroundings, the one-and-a-half year old female charged the man and chased him as he ran. In an attempt to escape, the man ran across the street. Unfortunately, the bear was not intimidated by the sound of traffic and proceeded out into the street, where it was hit by a bus before retreating away into the distance.

There are a lot of questions to answer. Check it out.

With a lot to unpack here, I will start by reporting that the bear was later found hiding behind heating pipes at an industrial site. It was hurt and scared, but alive and without any critical injuries. Thank goodness.

The first question that you may be asking is, “where did this bear come from?”

Well, the answer is about as wildly Russian as you might expect. The bear was being housed at a local, private zoo that is part of a hotel, sauna and car wash complex. I don’t know even know how to put into words what a ridiculous combination that is. Stop by to get your car detailed, get a steam at the sauna while you wait, and be sure to check out the LIVE BEAR. What????

It is clear that the owner was unfit to have a bear to begin with. When you continue to ask questions, that notion becomes even more clear.

The second question that you may be asking is, “how did the bear get out?”

The short answer is that we don’t have an answer. However, when the police told the owner that they had found the bear, he did not want the bear back and permitted for the authorities to put it down. If we wanted to connect the dots and jump to (fairly logical conclusions), the owner let it out. Fuuuuuuck that guy.

The third question that you may be asking is, “what happens next?”

Well, once again, we don’t really know. The local authorities said that they were monitoring the animal and would decide her fate— but zoos in Siberia have refused to accept the bear thus far.

The good thing is that we all feel similarly about the situation. We being you, me, local residents and pretty much everyone, everywhere. This bear should not have been caged up in such a horrible manner, it shouldn’t be legal to own an animal in that way, and the bear should not be put down. But Russia continues to be the wild and craziest place on earth. Can you imagine if a bear chased a man down Michigan Avenue in Chicago or Broadway in New York City? Both locations aren’t entirely comparable, but the point stands. It was utter chaos and Russia needs to figure it out before something like this goes down again. A car wash, sauna, hotel zoo shouldn’t be a thing to begin with. Start there.