Russian Rapper Chopped Up Into Pieces By Wife, Organs Stored In The Fridge 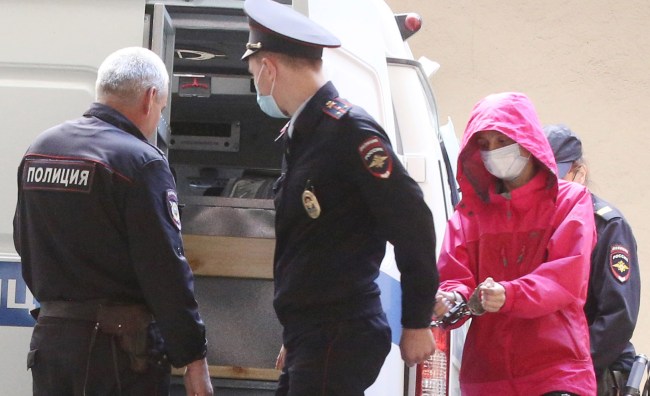 Andy Cartwright, real name was Alexander Yushko, a popular Russian rapper, was found dead at the age of 31 after his body was found dismemebered in his apartment in St. Petersburg.

Making the story somehow even more grisly, his wife Marina Kokhal admits being the one who cut up his body, while their two-year-old son was home, but denies actually killing him.

The 36-year-old Kokhal claims the rapper died of a drug overdose, having found a syringe next to his body, and she was just trying to make him disappear after such an “inglorious” death.

Rapper Andy Cartwright 's wife has reportedly killed him, and then proceeded to use a knife, hammer, hacksaw … and chopping board to dismember his body over four days, in front of their son, and 'kept organs in fridge'

After finding him dead, she said she used a knife, hammer, hacksaw, plastic bowl and chopping board to cut his body up into pieces, cleaned his organs in a washing machine, treated his limbs with salt and then placed them in in black plastic bags and the couple’s refrigerator.

According to Saint Petersburg-based website ‘Fontanka’, the police were informed after 36-year-old Kokhal contacted a lawyer for advice, explaining that Cartwright had died four days ago of a drug overdose.

In their apartment on Petersburg’s central Nevsky Prospect, law enforcement officers found his remains in five separate packages, all inside the refrigerator. Cartwright’s wife told the police that she wanted to hide the body, explaining that she did not want her husband to be known for dying from a drug overdose, and decided that he would “just disappear.” She dismembered his corpse but could not figure out what to do next.

Kokhal and the rapper – real name Alexander Yushko – have a young child, according to Russian news outlet Lenta. The woman cut up her husband’s corpse for four days, all while their offspring was in the apartment.

If Kokhal’s story does not match the facts found in the investigation of Cartwright’s death, she will likely be charged with murder. If her story adds up, she could be charged for the “abuse of a dead body.”

According to popular Telegram channel Baza, Cartwright’s body parts were sawn “perfectly,” his organs were cleaned in a washing machine, and his body parts were dumped in salt before being packaged and stored. The channel also claimed that Kokhal dismembered the body with the help of her mother, before perfectly cleaning the apartment and filling it with incense.

Russian channel REN TV reported that an initial test found no trace of drugs in Cartwright’s body. Police also reported not finding any drugs in the couple’s apartment. Cartwright’s friends also denied any knowledge of drug use by the rapper.

Kokhal has been charged with Cartwright’s murder.

“The wife of the victim has been detained. She has now been charged,” the Investigative Committee said in a statement.

The Moscow Times reports investigators claim the couple had gotten into a fight and Kokhal caused his death “in a way not determined.”

“Then to cover up traces of the crime, the woman … cut up the body of the victim into separate body parts with the aim of later destroying them,” the investigators said.

Authorities also are reported to believe Kokhal mother was involved in some way. Detectives have ordered her not to leave the city, according to the Mirror.

Earlier this year, Cartwright appeared on the popular “Versus Battle” series.