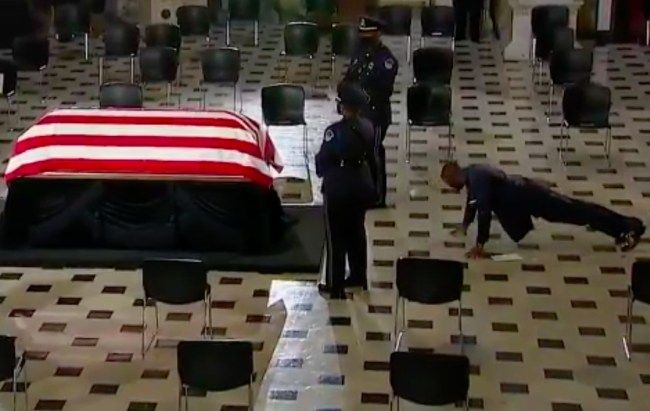 Last week, Ruth Bader Ginsburg passed away at the age of 87 following a battle with pancreatic cancer after serving on the Supreme Court for 27 years. The justice became a bit of a cult figure in her later years thanks to a loyal following of fans who dubbed her “The Notorious B.I.G.” not only because of the causes she supported while on the bench but the resilience she showed off of it.

Ginsburg’s first bout with the disease came when she discovered she had colon cancer in 1999 and was diagnosed with various forms of the illness on five different occasions before ultimately succumbing to it at an age most of us can only hope to eventually make it to—which she managed to do thanks in no small part to her commitment to hitting the gym on a regular basis, where she worked out with the help of personal trainer Bryant Johnson, who released a book a few years ago outlining the routine she relied on to stay fit.

At the age of 85, Ginsburg was pumping out 10 push-ups during her bi-weekly workouts (which she stressed were not the”girl push-ups” that involve sticking your elbows out as far as possible to basically defeat the point of doing them in the first place), which is pretty damn impressive.

On Friday, Johnson (who also coaches Elena Kagan and Stephen Breyer in the private gym located in the Supreme Court) paid his respects by visiting Ginsburg’s casket in the Capitol building’s Statuary Hall and didn’t let the fact that he was wearing a suit stop him from dropping down and doing a few push-ups in her honor.

When I first saw the video, I wasn’t really sure how to react to what is an objectively wild move considering the circumstances, but after getting the chance to process it, I’ve come to the decision it’s a pretty cool gesture from a guy who obviously knew her well enough to know she’d appreciate it.