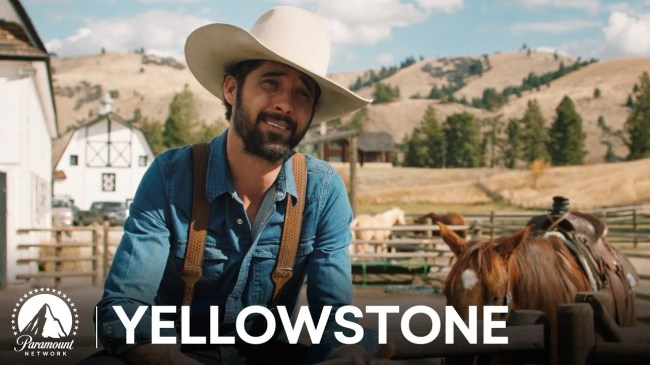 ryIf you haven’t seen the Paramount Network’s hit drama ‘Yellowstone,’ you should check it out. The show follows the Dutton family, who own the largest ranch in North America. Set in the Big Sky Country of Montana, the ranch is constantly under attack by land developers, a Native American reservation and the nation’s first national park. It is a unique look at the best and the worst of the United States, where land is worth billions and politicians are owned by oil, gas and lumber corporations, through the eyes of a family that settles somewhere in between. But that’s actually not why we’re here.

The cast stars Kevin Costner, Luke Grimes and Kelly Reilly and features frequent appearances from Americana singer-songwriter Ryan Bingham. Bingham, who grew with music by playing after the rodeos he joined as a bull rider in his teens, signed his first record deal in 2007 and has since released seven albums— with an eighth on the way, it would seem.

In these crazy times I’m finding solace in the things that help pass the time. So many songs have come to me lately. Sometimes the hardest part is staying opened up so there’s enough room for light to come in. Guess it’s time to get to work on a new album… pic.twitter.com/KF0QvbCGzN

The cast and crew are back in the western world to film season four of Yellowstone and it would make sense that the 39-year-old musician would find inspiration for his next tracks in such a beautiful part of the country. Bingham’s Cantina Sessions, which he began at the beginning of the COVID-19 global pandemic in March, have also moved to the set. Performing live acoustic covers of various artists from Tom Petty to John Lennon to Bob Dylan, his most recent track is a stripped-down version of the old blues song ‘Key To The Highway,’ which has been recorded by BB King, Eric Clapton and Little Walker.

With season four of Yellowstone expected to debut in June of 2021 and a new album on the way, thinks are looking pretty good for Bingham and we’re here to soak up every drop.