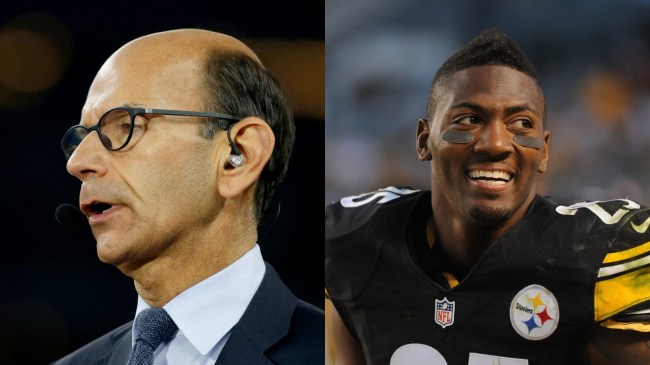 There’s no secret to what Paul Finebaum’s shtick is. In fact, it’s why he’s employed by ESPN, who shamelessly wields Paul Newman — and to a certain extent, Stephen A. Smith, albeit in the other political direction — to appease to certain sections of our society.

And while Finebaum’s tired act may get slurped up by his fans, that’s certainly not the case amongst his colleagues, particularly Ryan Clark and Dominique Foxworth.

During the Wednesday morning episode of ESPN’s Get Up, Finebaum, Foxworth, Clark, Get Up host Mike Greenberg, and reporter Dan Graziano were discussing the current state of Carolina Panthers quarterback Cam Newton and his future in the National Football League, which prompted Finebaum to say that Cam Newton “has never really cared about anyone but Cam Newton” and that he “brought” the Carolina Panthers “franchise down.”

Former Pittsburgh Steelers safety Ryan Clark took exception to Finebaum’s analysis, as he had just said minutes earlier that Eli Manning was “the epitome of class”.

“So we’ve got to take out how we feel about a dude because he’s a Manning, because we love him, because he gives us this, ‘Aw shucks you can do whatever you want to me and I’m going to be okay about it,'” Clark continued.

Clark himself even acknowledged the moment on Twitter, saying he “can’t just let anything go.”

While Finebaum’s analysis of this being “the end” of Cam Newton’s time as a franchise QB may turn out to be apt, to praise Eli Manning before claiming Newton has “ruined” the Panther is just simply asinine, as Eli arguably should have been benched by the New York Giants over two years ago.