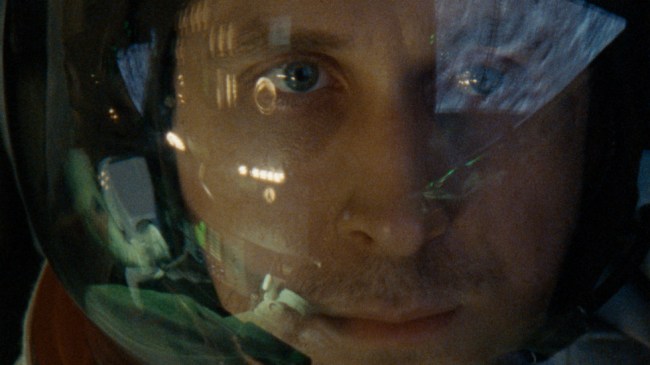 At 10:56 p.m. EDT on July 20, 1969, Neil Armstrong became the first man to step foot on another world. “That’s one small step for man, one giant leap for mankind,” Armstrong said as he planted his foot on the moon. Armstrong died on August 25, 2012, at the age of 82, but will be memorialized in the upcoming biopic First Man starring Ryan Gosling as Neil Armstrong.

Gosling’s Armstrong character stares at the Saturn V rocket as it blasts off from the launch pad and into space in the trailer. The movie will document how Armstrong dealt with the pressures of going to the moon and how his family was affected by his critical mission. “There are risks, but we have every intention of coming back,” Armstrong tells his son in the trailer.

First Man will also delve into Armstrong’s other incredible, sometimes overlooked accomplishments, such as piloting the X-15 hypersonic rocket-powered aircraft to the edge of space, how he nearly died during training for his moon mission and ejected from a Lunar Landing Research Vehicle (LLRV) that was completely destroyed, and saving the Gemini 8 mission when a malfunctioning thruster sent the spacecraft into an uncontrollable spin. The film will cover Armstrong’s life between 1961 and 1969.

The movie is an adaptation of James Hansen’s 2005 authorized autobiography, First Man: The Life of Neil A. Armstrong. Joining Gosling is someone who knows the actor very well, director Damien Chazelle, who worked with Gosling on the Oscar-winning film La La Land. Chazelle became the youngest Best Director Oscar-winner in Academy Award history with La La Land.

“What I really wanted to do here is get to know the people who embarked on this unimaginable journey,” Chazelle said in April. “And take audiences with them in a truly immersive big-screen way as they shot towards the heavens and towards those first few steps on the moon.”