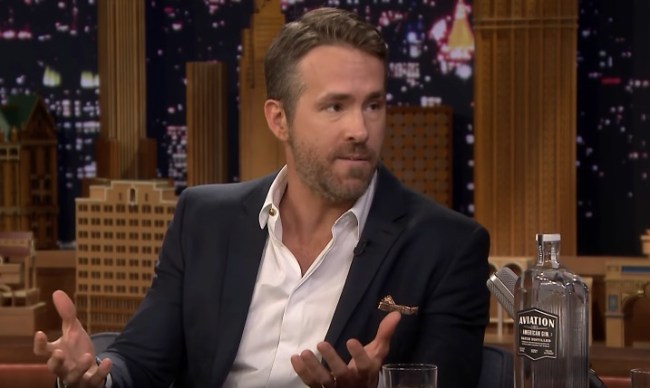 Ryan Reynolds is living his best life these days.

He starred in Deadpool 2 earlier this Summer, a film he co-wrote and starred in. Ryan Reynolds is married to the absolutely stunning Blake Lively. A Deadpool 3 was announced and The Croods 2 is already in pre-production.

Ryan was a guest on The Tonight Show Starring Jimmy Fallon last night where he talked about how he basically walked himself into buying a gin company. He was shooting a film in Vancouver and was at a restaurant where he ordered a Negroni (my personal favorite cocktail). He told them it was the best Negroni he’d ever had in his life.

Reynolds then went back to the same spot 8+ times while filming and ordered the cocktail repeatedly before asking what gin they used in the drink. That’s when he found out about Aviation Gin. He says it’s an American Gin which (in general) means it’s smoother than its Britsh counterpart.

He then did the only sensible thing an absurdly rich guy can do in that situation, he weaseled his way in as an owner.

Now that Ryan Reynolds is a co-owner of Aviation Gin he attends board meetings, sales meetings, pitches, etc. And he has an official company email (obviously). Ryan’s one of the sharpest writers in Hollywood, as is evidenced from Deadpool and Deadpool 2. So you can imagine just how over-the-top his ‘out of office’ reply email is for when he’s traveling.

Here’s Ryan talking about his foray into the world of Gin:

Imagine strolling into a nice restaurant, ordering a delicious cocktail, and being so wowed by the drink you that say to yourself ‘fuck it, I’m going to buy this company’. That’s when you know you’ve made it, right?

He’s that that Marvel Money now that allows him to do pretty much anything and everything he wants in life. And his wife is equally as wealthy and successful.