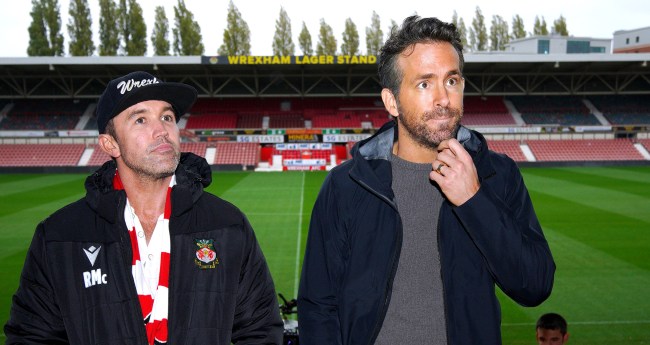 Famous comedic actors Ryan Reynolds and Rob McElhenney surprised a lot of people when it was revealed back in November of 2020 that they had taken over a 100 percent controlling interest in the Wrexham Football Club with an initial $2.77 million investment.

That surprise, however, was nothing, one can assume, compared to the surprise the patrons of a Welsh pub where Reynolds and McElhenney showed up to drink some pints and do some shots with the locals.

Two of the locals who were in attendance at the pub that day were Declan Swans and Ben Sheppard who managed to snap a couple of photographs of Reynolds and McElhenney enjoying their libations.

Shots with the owners🤣🍺👍 pic.twitter.com/hTIndPKU2n

Bouncer – ‘you lads good, had one too many?’

While it’s not totally clear which pub Ryan Reynolds and Rob McElhenney were visiting, British website UNILAD believes they narrowed it down to the Wheatsheaf Inn and the Turf Hotel based on a sign in the background which reads “Mold Road.”

Reynolds, who recently said he is taking “a little sabbatical from movie making,” will still be keeping busy as the Welcome to Wrexham docuseries is set to run for two seasons on FX.

“In 2020, Rob McElhenney and Ryan Reynolds teamed up to purchase Wrexham Football Club in the hopes of turning the club into an underdog story the whole world could root for,” an announcement from FX read. “The worry? Rob and Ryan have no experience in football or working with each other. That said, they are serious about their investment in Wrexham, improving the cub, and doing right by the townspeople.”

Based on the photos of the two funny guys at the local pub, they are well on their way.

Steps to building a business empire include wearing glasses, sitting on stools, and taking black-and-white photos for @WSJMag. @MaximumEffort pic.twitter.com/k3grCcu3fk

We didn’t want our first win to be away anyway.☺️ Congrats to @MUFCYorkRoad on a tough game. See you at Y Cae Ras @Wrexham_AFC 🏴󠁧󠁢󠁷󠁬󠁳󠁿 pic.twitter.com/74Ucxk9Wwr