Sammy Hagar Says He’s Willing To Die For The Economy Because ‘We All Gotta Die, Man’ 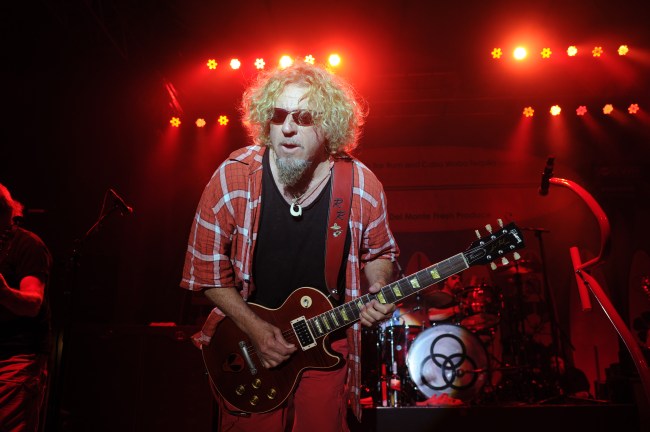 If you had ‘Sammy Hagar is willing to sacrifice lives for the economy’ on your 2020 BINGO card then you can go ahead and check off that box now because the Cabo Wabo Tequila founder has just rattled off some wild ideas on what needs to be done in this country.

Rolling Stone ran an article where they interviewed 14 veteran touring musicians and asked them about how they’re coping with the new normal. Stevie Nicks said all she has is time right now to do the things she’s always wanted to do in life. John Fogerty says he doesn’t see a solution until there’s a vaccine available and said the ‘opening up talk’ is scary and he’s cautioned his family “if it was lions and tigers roaming out there, you could see that, so that prepares you psychologically, so you realize you don’t want to go out there and be reckless.”

Meanwhile, Sammy Hagar says he’s willing to sacrifice himself for the economy. He says he’d personally rather die ‘if that’s what it takes’ to get people back to work. Hagar told Rolling Stone ‘we all gotta die’ and there may be a time where each of us has to sacrifice (our lives?) for…the economy?

I’ll be comfortable playing a show before there’s a vaccine, if it’s declining and seems to be going away. I’m going to make a radical statement here. This is hard to say without stirring somebody up, but truthfully, I’d rather personally get sick and even die, if that’s what it takes.

We have to save the world and this country from this economic thing that’s going to kill more people in the long run. I would rather see everyone go back to work. If some of us have to sacrifice on that, OK. I will die for my children and my grandchildren to have a life anywhere close to the life that I had in this wonderful country. That’s just the way that I feel about it.

I’m not going to go around spreading the disease. But there may be a time where we have to sacrifice. I mean, how many people die on the Earth every day? I have no idea. I’m sorry to say it, but we all gotta die, man. (via)

That’s a whole lot to digest there but I’m not even going to bother tackling his quotes. I’ll continue listening to experts, not some dude trying to solve the world’s problems from his Lay-Z-Boy chair. I personally can’t believe we’re nearly six months into this and everyday people are still giving their opinions on how to fix things when it’s been evident from Day 1 that we’re safer and better off listening to the experts and only the experts. Also, in case you were curious, Sammy Hagar’s net worth is an estimated $150 million according to Celebrity Net Worth.

In that same Rolling Stone article, Bruce Springsteen offered up this comforting piece of advice:

I feel like Muhammad Ali, who was at his prime — well, I’m in my late prime — and the years he could have spent boxing were taken away from him. So I try to heed my deceased Aunt Eda’s advice. She always said, “Just live every day as if you’re gonna live forever.” I think she meant, greet each day on its own terms, as an opportunity for life’s possibilities. Breathe it in. Let the world open up before you, and prepare yourself to accept it in its entirety, on its own terms, with a vengeance. Well, I’m ready, and I hope you are, too.

Listen to The Boss.

Breathe in each new day but accept it on its own terms, don’t get stuck thinking about the future. I know I find myself in those traps each day of wondering when I’ll be planning my next trip.