Samuel L. Jackson Discusses The Last Time He Saw Chadwick Boseman, Reveals They Had A Project In The Works 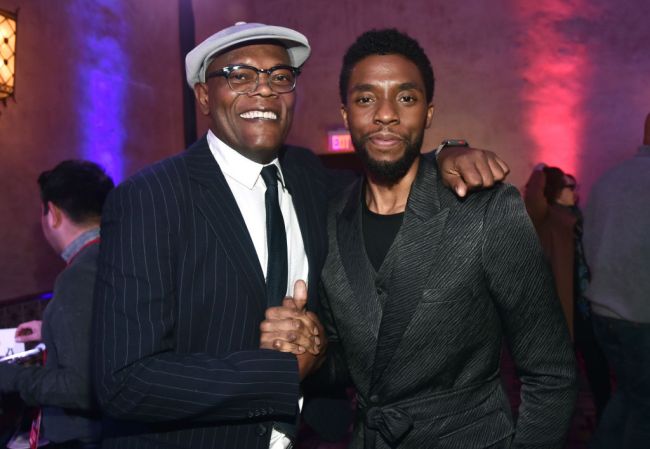 While it’s now been close to two weeks since the sudden and tragic passing of Black Panther star Chadwick Boseman, the pain and shock of his death don’t seem as though it’s going anywhere anytime soon.

What makes Boseman’s death so unique is the fact that essentially everyone in the world was made aware of the news at the same time. Whether you were a teenage fan of Black Panther or one of Boseman’s co-stars in Da 5 Bloods, the 43-year-old actor’s battle with colon cancer was largely fought in private.

Take someone like acting legendary Samuel L. Jackson, for example, who was just as caught-off-guard by the news as you and I were.

During a recent appearance on The Tamron Hall Show, Jackson revealed that not only was Boseman’s death a shock to him as well but that the pair were actually working on a non-Marvel project together

“Yes, it’s sudden to us all. I was trying to remember the last time I’d actually seen Chadwick. And I was talking to Zoe, our daughter about it and it was at the Captain Marvel premiere. We walked and we started talking about another project that I had hoped that we were gonna work on,” Jackson began. “He was like, ‘I’m sorry, y’all, I’m not going to be there, but I wish we were gonna work together.’ We were talking about it, we had planned it for a while and it was, you know, it’s gut-wrenching, you know, to lose someone that’s such an important part of the culture.”

He continued, “In terms of what he became to the world with Black Panther. We all hope when we work that people will remember things that we will do. But he imprinted society in such a way, impacted especially the Black culture and giving kids a hero that they could aspire to. To lose him, I don’t even know if I could tell my kid that. It’s devastating.” [via ComicBook]

Despite the fact that the pair both starred in the Marvel Cinematic Universe — Boseman, of course, as Black Panther, while Jackson stars as Nick Fury — their two characters actually never crossed paths.

As for what project the pair were working on, Jackson didn’t say, but you can only imagine how desperately the duo wanted to share the screen, especially since they were both a part of the Spike Lee family tree of acting.