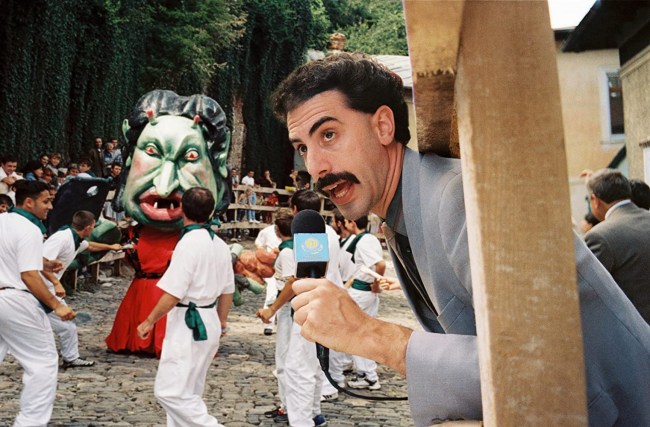 I started watching Avatar: The Last Airbender last week. It’d gotten to a point where I had to figure out what all the hype was about after the series not only blew up on Netflix but elicited effusive praise from full-grown adults like co-worker Cass, who swears by the series and its realistic depictions of war. Plus, and mainly, I was hungover as almighty hell, so I figured what was to pass the time than a cartoon that requires the brainpower of a child?

Point being, in Avatar, every episode starts off with the following introduction:

Long ago, the four nations lived together in harmony. Then everything changed when the Fire Nation attacked.

Only the Avatar, master of all four elements , could stop them. But when the world needed him most, he vanished.

Long story short, that’s sort of how I feel about Borat: when the world needed him most, he vanished, but now — similar to Aang being thawed from the ice — he’s finally back to hopefully save us all. That’s right folks, earlier this week, famed comedian and prankster Sasha Baron Cohen was seen sporting his perhaps his most famous disguise: Borat.

Yes, this is Sasha Baron Cohen dressed as Borat. And yes, this video is from *this week* 👀🤯pic.twitter.com/tleN6LPPVD

If you’re too young or simply don’t remember, Borat: Cultural Learnings of America for Make Benefit Glorious Nation of Kazakhstan, was a 2006 mockumentary that featured Cohen as a Borat Sagdiyev, a fake Kazakh journalist “who travels through the United States to make a documentary which features real-life interactions with Americans.”

Borat instantly became a pop-cultural phenomenon and has remained one to this day, as his catchphrase “very niceeee” still remains a part of the zeitgeist to this day.

As for what this project could be, no one is really sure, but there’s no denying that whatever Sasha Baron Cohen is cooking up, it spells trouble for the unfortunate souls who happen to cross his path.