After Saying It’s ‘Not Natural’ To Be Monogamous, Scarlett Johansson Is Now Engaged To Colin Jost 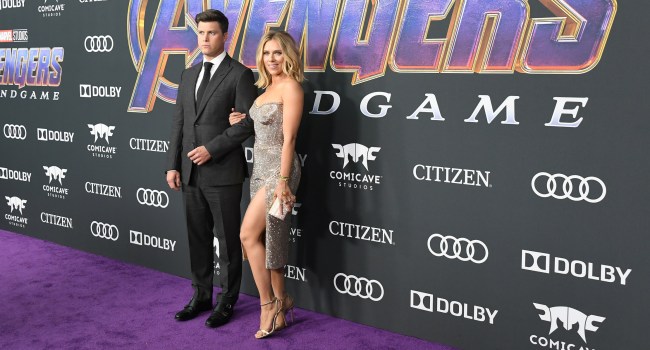 Back in Februrary of 2017, Scarlett Johansson was reportedly in the midst of going through a divorce with her second husband, French journalist Romain Dauriac, who she married in 2014.

At that time, speaking to Playboy magazine for their March/April 2017 issue, Johansson said about marriage, “I think the idea of marriage is very romantic; it’s a beautiful idea, and the practice of it can be a very beautiful thing. I don’t think it’s natural to be a monogamous person.

“I might be skewered for that, but I think it’s work. It’s a lot of work. And the fact that it is such work for so many people — for everyone — the fact of that proves that it is not a natural thing.”

In May of 2017, after appearing in a cameo on Saturday Night Live, she was reportedly “making out at the bar at the SNL season finale party” with “Weekend Update” co-host Colin Jost. And it reportedly wasn’t the first time.

Now the 34-year-old Johansson, who was also previously married to Ryan Reynolds from 2008 to 2011, is ready for round three as she and Jost, 36, are officially engaged.

Back in September of 2017, Jost told Entertainment Tonight, “She’s pretty cool… It’s hard to have a lot of complaints, she’s pretty awesome. The first time she hosted was the first year I was a writer on the show. So, we’ve kind of known each other since then…she’s the best.”