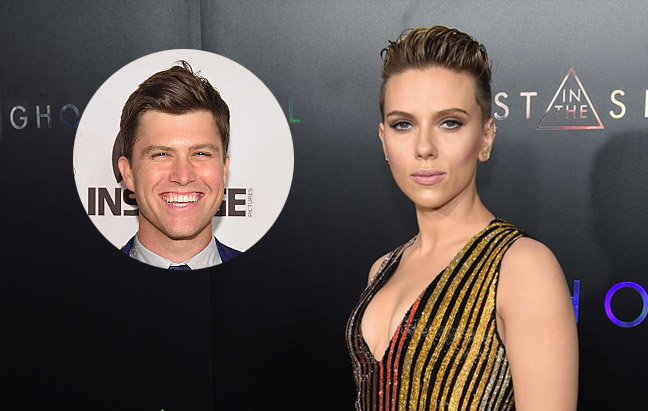 Remember when Scarlett Johansson said that she was getting a divorce so she could basically bang other dudes?

If not, here’s what she told Playboy…

“I think the idea of marriage is very romantic; it’s a beautiful idea, and the practice of it can be a very beautiful thing. I don’t think it’s natural to be a monogamous person.”

“I might be skewered for that, but I think it’s work. It’s a lot of work. And the fact that it is such work for so many people — for everyone — the fact of that proves that it is not a natural thing.”

“It’s something I have a lot of respect for and have participated in, but I think it definitely goes against some instinct to look beyond.”

Yeah, well, according to multiple sources, Johansson lived up to her words and got busy “looking beyond” at the Saturday Night Live end of season wrap party with “Weekend Update” co-host Colin Jost.

Apparently, after completing her duties there she decided to stick around and Jost was the beneficiary.

After the show, the actress, who is currently going through a divorce, hit it off with handsome comedian Jost at the boozy afterparty held at the ice rink at Rockefeller Center, which raged into the early hours of Sunday morning.

A witness told Page Six, “Scarlett and Colin were making out at the bar at the ‘SNL’ season finale party at 30 Rock . . . They would make out a bit, then go back to talking,” says the source. “They were at the bar in front of everyone . . . they made out at least twice . . . Then they went back to talking and hanging with other people.”

Another source confirmed, “Scarlett and Colin were flirting and canoodling in full view of everyone at the afterparty, including the ‘SNL’ cast and crew. They were laughing and seemed to really hit it off.”

Oh shit, they were canoodling? This is more serious than I realized.

Apparently this wasn’t the first time either…

E! News learned Monday that Johansson, 32, and Jost, 34, had actually been “hooking up” prior to the party. “Saturday night wasn’t the first time,” an insider says. “It’s been going on for a bit.”
…
The stars began seeing each other after Johansson’s hosting gig, and they’re both on the same page about what their relationship is. As the insider explains, “At this point, it’s fun and casual.”

Hmmm… I don’t know how I feel about this pairing. I mean, Jost is no Gordon Ramsey, AKA Johansson’s choice for hottest man in the world (no, I am not joking) so who knows how long it will really last.