Science Teacher Hits The Jackpot And Marries The Richest Woman In The World, Mackenzie Scott 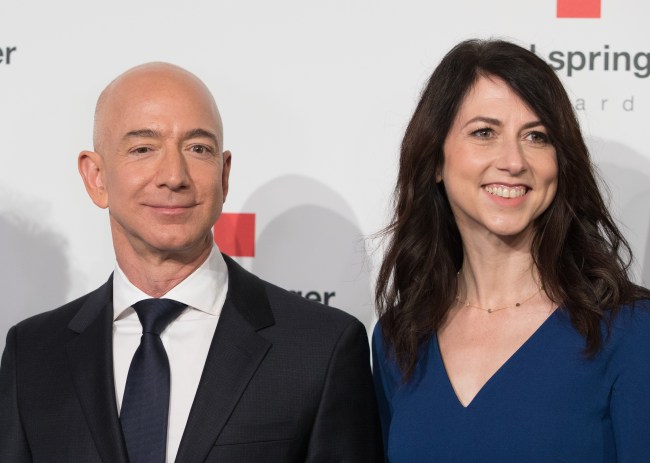 This photo features Mackenzie and her former husband, Jeff Bezos. I couldn’t find any photos of her new husband, Dan.

Mackenzie Scott has remarried a high school science teacher named Dan Jewett. And together, they are going to give away billions and billions of dollars:

The billionaire philanthropist MacKenzie Scott has remarried after her divorce from Amazon’s founder, Jeff Bezos. Her new husband, Dan Jewett, is a high school science teacher. He has pledged to work with her in giving away much of her billions. https://t.co/sUsNhcDUGB

The billionaire philanthropist MacKenzie Scott has remarried after her high-profile divorce from Amazon’s founder, Jeff Bezos.

In a letter posted to the website of the philanthropy nonprofit organization the Giving Pledge on Saturday, Dan Jewett, a science teacher at the prestigious Seattle school attended by her children, said that he was “grateful for the exceptional privilege it will be to partner in giving away assets with the potential to do so much good when shared.”

“In a stroke of happy coincidence… I am married to one of the most generous and kind people I know — and joining her in a commitment to pass on an enormous financial wealth to serve others.”

A happy coincidence? Yeah Dan? You just happened to match with some lady named Mackenzie on OKCupid, went on a couple standup paddling dates, dropped a few terrific science puns, fell in love and… lo and behold, you come to find she’s worth $53 BILLION DOLLARS!! What a happy coincidence indeed!

Take your graduated cylinder and shove it, Dan. That’s Mackenzie’s money. Keep your paws out of the philanthropy jar.

Let’s hear from the experts on this “happy coincidence”:

“I don’t think it’s that surprising to me that she added her husband,” said Debra Mesch, professor at the Women’s Philanthropy Institute at Indiana University. “She’s saying, ‘We’re a couple now and our household giving is going to be together.’ That’s what a lot of couples do.”

Ughhhhh don’t defend him, Debra. I can’t stomach your liberal, progressive, cotton candy inclusiveness this early in the day. I want SCORCHED EARTH from a professor at the Women’s Philanthropy Institute. This husband is so new that he’s still wearing his tags! Mackenzie hasn’t even thrown out the return shipping label yet! I’ll bet “Dan” (if that’s even his real name) probably has to open 10 drawers before he finds the silverware, has no clue how the coffee maker works, and confuses the names of his step-children. Yet somehow, he’s already a PARTNER in giving away BILLIONS OF DOLLARS?!

I say he has to earn it. Let him shovel the walk 400 times, pick up the dog’s poop with a hockey stick for a year, have the kids call him some emasculating nickname like “Doorknob Dan” behind his back but also in front of his back. Let’s really break his soul and watch him dissolve in a puddle of tears. If he comes back from it, then—and ONLY then—can he have a say as to which charities they should direct their largesse.

What a come-up for Dan Jewett though, right? One day he’s driving to school in some beat car, sanding obscenities off the underside of his classroom desks, warning hyperactive teenagers about the proper operation of bunsen burners, and making $75k/year. Next thing you know, he’s flying private to check out construction sites to BUILD schools for communities that need them, all thanks to his new wife—the richest woman to ever walk the earth. I haven’t seen a transformation like that since the early Pimp My Ride episodes.

In a statement, Mr. Bezos said, “Dan is such a great guy, and I’m happy and excited for the both of them.”

Ha. I think we can all read between the lines here. If you think Jeff Bezos is “happy and excited” that a science teacher named Dan now has a say in giving away billions of Jeff’s ex-wife’s money, you don’t know Bezos.

PS- I’m totally kidding. Mackenzie Scott is great and her husband Dan seems like a good guy. Sure hope she made him sign a prenup though.