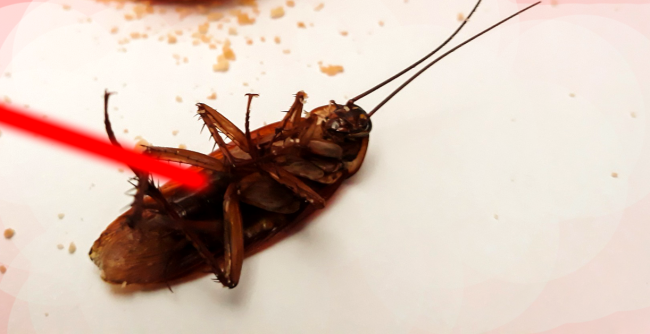 Back in July of 2020, the YouTube channel Mad Science published a video titled “What If The Robot Anki Vector Sees The 1000 Cockroaches? Artificial Intelligence Vs Cockroaches.”

It was only theoretical, but apparently they weren’t the only ones thinking about such a bizarre idea because some scientists actually went and did it.

Ildar Rakhmatulin of the Heriot-Watt University in the United Kingdom his colleagues created a robot that can track and kill cockroaches using a frickin’ laser. (The researchers gave their experiment a much more sciencey title: “Selective neutralisation and deterring of cockroaches with laser automated by machine vision.”)

According to New Scientist, the robot is controlled by two cameras and a small computer running an artificial intelligence model.

Why would scientists create a robot that kills cockroaches with a laser?

“If you can kill them, you can kill any pests,” said Rakhmatulin, who added that using a robotic laser has the potential to be cheaper and more environmentally friendly than insecticides.

The cockroaches were placed in a transparent box designed not to impede the laser, but to keep the insects from escaping the experiment area. The cockroaches ran at an average speed of 1.3 metres per second, but the laser tracker was able to keep up with their movement.

When the laser hit a cockroach’s abdomen, it was killed before it could get away, but when it hit a leg first, they escaped with only slight damage. The researchers say they will need to train the AI to aim for certain parts of the cockroaches’ bodies to increase the effectiveness of the system.

He also says that the AI model can also be trained to target different types of insects like mosquitoes, locusts or caterpillars.

Rakhmatulin estimates that an anti-pest laser system for the home could be created for around £25 ($29).

Speaking to Vice, Rakhmatulin said, “It’s not recommended because it’s a little dangerous.”

“It’ll never be absolutely safe,” he reiterated to New Scientist. “It’s my opinion that it cannot be used for home applications. If we talk about industrial or agricultural applications, it’s a very serious possibility. It’s very cheap, even compared to pesticides, because laser prices are not so high.”