A ‘Sea Snot’ Outbreak Is Suffocating Fish In Turkey And It’s Some Of The Slimiest, Grossest Sludge That You Will Ever See 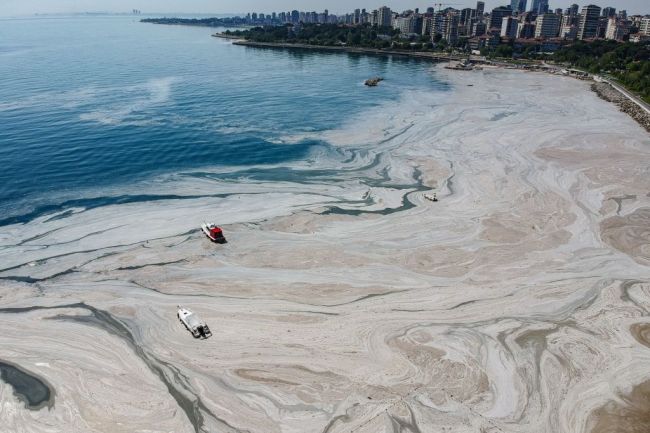 Sea snot is as gross as it sounds and it’s doing a lot of damage in Turkey. A thick layer of the slimy organic matter is posing a great threat to marine life and the fishing industry as it spreads in the sea south of Istanbul.

A time-lapse video taken in Istanbul has shown how "sea snot" invaded the Marmara Sea. Turkey's environment minister pledged on June 6 to defeat a plague of "sea snot" with a disaster management plan he said would secure its future.https://t.co/5YeTV1lSY6 pic.twitter.com/BOqseiECja

What is sea snot?

Known scientifically as marine mucilage, its name bears a striking resemblance to human mucus, giving it the nickname snot.

At its base, sea snot forms from pollution. As sea temperatures rise and untreated sewage is discharged into the sea, phytoplankton thrive on the nutrient-rich waters and discharge the mucilage. It creates a grey, thick, nasty sludge.

What is this thick layer of 'sea snot' spreading across the Turkish sea?https://t.co/6EiA0eIrTw pic.twitter.com/aFZqVXM6Pe

In this instance, Turkey’s President Erdogan blamed the current outbreak, the worst since sea snot’s first documentation in 2007, on untreated water being dumped from cities like Istanbul. Per the Guardian, he vowed to “clear the seas from the mucilage scourge,” but it could take some time. It is a massive outbreak and it’s so gross.

Beyond the visual impact, it’s causing significant damage to seabeds.

Harbours, shorelines and swathes of seawater are covered by the viscous substance and a lot of it is sinking below the surface. As a result, it is killing the seabed, coral, and the marine life around it.

In addition, the snot is preventing local fishermen from working. Not only are large numbers of fish and other fished species (like oysters and mussels) dying from suffocation, but the snot clogs up their motors and nets.

This outbreak of mucilage is currently contained to the Sea of Marmara. That body of water connects the Black Sea to the Aegean Sea and officials are concerned that it will spread rapidly into those areas if not contained quickly.

“My fear is, if this expands to Black Sea… the trouble will be enormous,” Erdogan said. “We need to take this step without delay.”

Over the weekend, he unveiled an action plan to designate the entire Marmara Sea as a protected area. In addition, he introduced measures to reduce pollution and improve treatment of wastewater from coastal cities and ships.

The plan aims to reduce nitrogen levels in the sea by 40 percent, which scientists believe would help get the water back to their previous state. Erdogan also said that Turkey will begin the biggest maritime cleanup operation in the country’s history this week.