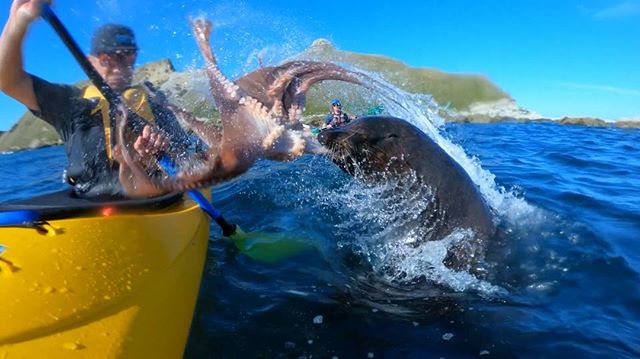 Nature is metal. And sometimes nature is bizarre AF. This video of a seal slapping a kayaker in the face with an octopus would qualify as both metal and bizarre AF.

We take you to New Zealand’s South Island where a kayaker received a front row seat as to a seal tenderizing its dinner. The GoPro video captured by Taiyo Masada shows the unbelievable moment that a seal and an octopus tussle off the coast of Kaikoura, New Zealand. A seal breaches the water with an octopus in its mouth and whips the eight-tentacled mollusk towards a kayaker.

The seal managed to weaponize a octopus and slap the man right across the face with the cephalopod. “I was like, ‘Mate, what just happened?’” said Kyle Mulinder, who was the octopus-battered man. “My face happened to be in the wrong place at the wrong time.” I guess you could say… this guy did not get… the seal of approval.

RELATED: Daredevil Raccoon Scaling 9 Stories And Then Leaping To The Earth Is The Best Action Movie You’ll Watch Today

“He thrashed it in mid fight and my face happened to be in the wrong place at the wrong time,” Mulinder told Yahoo. “I was like ‘mate, what just happened?’ It was weird because it happened so fast but I could feel all the hard parts of the octopus on my face like ‘dum dum dum.'”

Is this seal generously sharing his dinner or is he just the biggest Detroit Red Wings ever?

Here’s what a fight between a seal and an octopus looks like without it being interrupted with by some dude’s face.