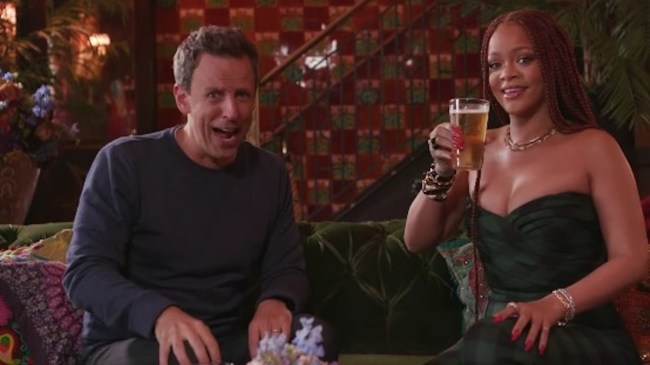 Given that you’re probably reading this article during a study break at school or a bathroom break at work, it’s likely that this video will give you the same feeling it gave me: damn, my job sucks.

Not like, actually sucks (truth be told, I quite love my job), but on the grand scale of potential jobs that exist out there, mine definitely sucks. Especially when comparing it to Seth Meyers — host of Late Night with Seth Meyers — getting paid to run around New York City day drinking with fucking Rihanna.

On its surface, the combination of ultimate corny white dude Seth Meyers and arguably the world’s coolest chick in Rihanna seems like an odd couple, but after a couple of straight shots of tequila, anyone in the world can become best friends, and that’s exactly what happens here.

Spending a day at The Jane Hotel in New York City, Seth and Rihanna drank Rihanna-themed cocktails (such as the Under My Rumbrella), gave advice to one another (Rihanna discussed walking away from music?!), and gave Seth a Fenty Beauty makeover (yes, it’s as horrifying as it sounds).

And truth be told, I don’t think I’ve ever been more jealous of anyone than I am of Seth Meyers right now. Not only is Rihanna, well, Rihanna, but she seems like a hell of a good time to get shitfaced with.

All that said, the funniest part of this video is realizing after watching this, internationally known, model fucking, chart-topping, NBA Championship winning rapper Drake actually wishes he was 45-year-old Northwestern University graduate Seth Meyers on this occasion.

As for day drinking with Rihanna, that just shot way up to the top of my bucket list. She’s single (I think?), I’m single, so who knows what kind of night a day of heavy drinking might lead to (actually, I do, it would end with me alone in my apartment falling asleep on the couch before my Dominos delivery arrives … like always).