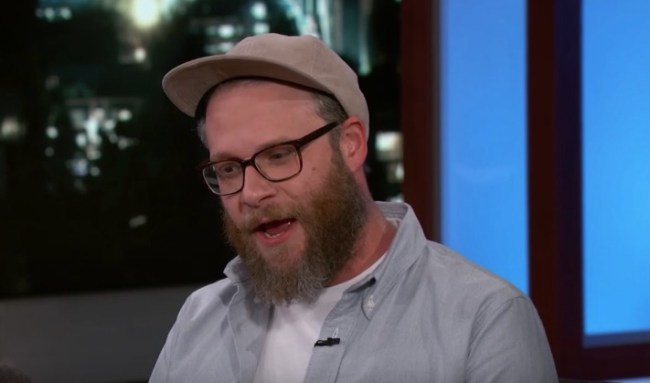 Seth Rogen’s riding the high of his recent Hilarity for Charity night in Los Angeles. I wasn’t fortunate enough to be there and was forced to follow along on my cousin’s Instagram feed but it looked like one of the best nights in LA of the year. Thankfully or myself and everyone else out there who didn’t score an invite, Seth Rogen sold the rights to Netflix for this massively impactful charity event which raises money for Alzheimer’s Disease and we’ll all get to see one of the best nights in comedy.

The segment below opens up with a clip from Hilarity for Charity where Seth Rogen talks about how Steven Spielberg will never hire him for any role because Seth once accidentally smoked a joint in his face. Seth goes on to tell Jimmy Kimmel about that experience before talking about his list of the Top 4 people he’d love to smoke weed with at some point in life:

Jimmy’s list includes Willy Nelson, Snoop Dogg, Woody Harrelson, Seth Rogen who appears to have supplanted Cheech (Marin) and (Tommy) Chong. I’m not sure I have a list of people I’d most want to smoke weed with in life. I have a comically low tolerance so it would be just a waste of an experience for the world if I got to smoke weed with a bucket list of luminaries…But, if I could take down a bottle of Pappy Van Winkle with any 4 people in the world, now that I’m ruminating on this, I think I could spend the rest of the day thinking and writing about this.

There are just too many great options out there…Fred Noe, the 7th generation Master Distiller of Jim Beam, Kelly Slater the #1 competitive surfer in history, Jack Nicholson and Sean Connery, Elon Musk might even be on that list these days because he’s seen/done/learned more in the past two decades than most people can even begin to comprehend, anyone from The Explorer’s Club executive committee in NYC because they have the coolest travel/expedition stories of anyone on the planet…This list could go on and on.