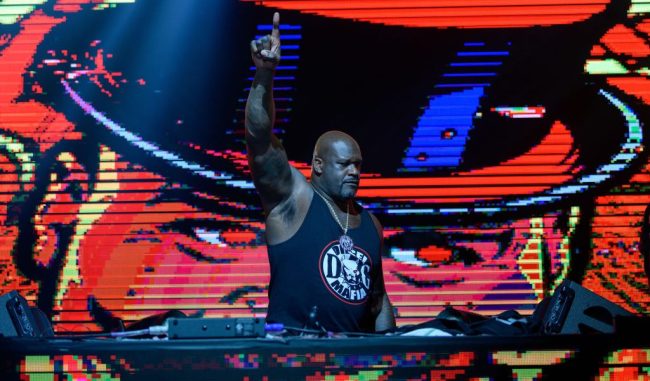 Dr. Shaquille O’Neal (Ed.D) did something that he has never done before. The 49-year-old NBA Hall of Famer, D.J., entrepreneur, spokesperson and jack of all trades went crowd diving.

DJ Diesel was played a set at Lost Lands Festival in Ohio on Sunday afternoon. The festival claims to be “the filthiest 3 days of bass music you have ever experienced” and Shaq had the place going crazy.

As the womps blared over the the speakers, Shaq decided to join on the fun. He is known to get in the crowd at music festivals, but he took a different approach this time.

Instead of just walking into the sea of people, he climbed up atop the fence and dove right in. As could be expected, he was not caught or held up and dropped to the ground.

I did something I’ve never done before haha @lost_lands pic.twitter.com/2IVHDszU8e

The fall did not stop his spirits. Shaq kept the party going by dancing, jumping and moshing with the chaotic mob.

It’s truly a wild thing, if you really think about it. There’s just something about a massive, former NBA center jumping into the crowd and throwing people around during his deep bass dubstep set that is incredibly captivating.

This, of course, is not the first time that the big Diesel has gone moshing. However, he had never attempted a “stage” dive before and it went about as well as it could have. Shaq didn’t stay up, but nobody was flattened and he didn’t just flop to the concrete. Best case scenario.