Shaq Fires Ruthless Shots At Kevin Durant, Questions His Legacy Outside Of Stint With Golden State 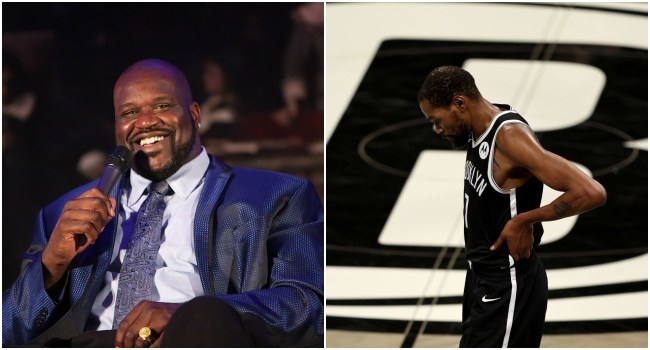 Ask any NBA fan — whether they be casual or wildly passionate — and they’ll likely tell you that the Association’s off-the-court drama is often just as, if not more entertaining than the action that actually unfolds on the court

Case in point: what other league has regular beef between players and studio analysts? That’s a unique feature when it comes to the NBA and it only adds to the narrative, and therefore the drama, when the players actually, you know, play the games.

This latest instance, for example, sees two of the greatest players of all time firing shots at each other, as Basketball Hall of Famer and Inside The NBA analyst Shaquille O’Neal took to Instagram to fire shots at Brooklyn Nets forward Kevin Durant.

The post, which appeared on Shaq’s Instagram story, showed a picture of Durant on the ground with a list of his accomplishments since he departed Golden State in 2019. The punchline, of course, is that the three-bullet list is empty, suggesting he’s done nothing of note since his title-winning years in the Bay Area.

This is really on Shaq ig story lmao pic.twitter.com/XQAIDh5lv0

Perhaps surprisingly, Durant has yet to publicly fire back at Shaq and instead mentioned his name when discussing 1990s NBA centers who would be in MVP conversations if they played today. Maybe Durant is trying out the “kill ’em with kindness” method instead of his usual “scorched Earth” approach.

I got Pat Ewing, shaq and David Robinson https://t.co/IsL1zUJMUc