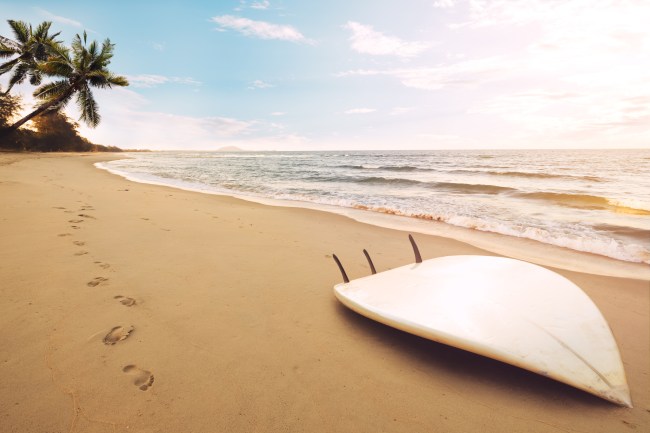 A 16-year-old surfer in Hawaii was ‘1 or 2 inches away’ from a nightmare experience over the weekend when a shark estimated between 10 to 12-feet-long took a huge bite out of his surfboard and nearly took off a chunk of the surfer’s body in the process.

This all went down around 7:30pm on Sunday evening. 16-year-old Max Keliikipi was surfing waves off Makaha Beach which is on the west side of Oahu, Hawaii. He told local KHON2 news that when he first noticed something he thought it was a turtle’s fin…It was not.

It wasn’t until the enormous shark was right next to him that he realized the gravity of the situation. Max estimates the shark was somewhere between 10-to-12 feet in length.

At this point, if you’re in his position you have to already be shitting your pants. The shark is clearly interested in you and what you’re up to. The goal has to be to make yourself not look like a sea turtle or seal and maybe the shark will move along. So that’s what Max did, tuck his feet onto his surfboard and hope for the best. That’s when things got REAL in a hurry.

“It goes underneath the water, [and] I put my feet on top of my board. I’m just sitting there, looking around for it,” Keliikipi told KHON. “And then, boom, it comes underneath me, bites my board.”

Keliikipi said the shark was “[…] literally, and I’m not exaggerating this at all, literally an inch or two in front of my feet.” The teen estimated the shark was between 10 and 12 feet long.

Keliikipi was thrown into the water when the shark took a bite out of the surfboard. Once in the water, instinct kicked in for the junior lifeguard.

“There is that fear factor. It was the fight or flight thing, and for me it was just flight. As soon as I hit the water, I just started swimming, and I didn’t think about where the shark was. I just had to get in [to shore],” Keliikipi said. (via KHON2)

Max’s story quickly went viral and hit the local news. Here he is showing off his surfboard on KHON:

Here’s Max in his element:

Max says he’s seen sharks in the water at that beach before but it’s never been a problem until now. According to Fox News, Max says from now on he’ll only be surfing that spot during the daytime and with friends around. There’s always strength in numbers when surfing wave breaks that are populated with sharks.

They don’t want to mess with a large group of anything and usually stay away. Likewise, sharks feed at dusk and dawn and in lowlight sunset conditions it’s harder for them to tell the difference between a surfboard and a seal or turtle.

Makaha Beach, where this all went down, is still listed as ‘High Hazard’ on Hawaii’s beach safety website but that’s referring to the big waves, I assume, and not the presence of sharks.